After the XS/Clifton sleeve arrived, Fred Cornell (Custom Shooting Accessories, 3579 Willawena Road, Sayre, PA, 18840; 570 888-9236) removed the action from the barrel and turned down the barrel on his lathe.  He then turned the receiver end to the dimensions required for the XS Systems sleeve.  After shortening the barrel to 20” with a muzzle diameter of .590”, Fred crowned it and sandblasted it.  He then screwed the receiver back on and epoxied the XS sleeve in place, each of us checking that it was at top dead center.  I had thought of darkening the sandblasted stainless barrel to match the anodized aluminum sleeve, but decided that I rather liked the contrast. 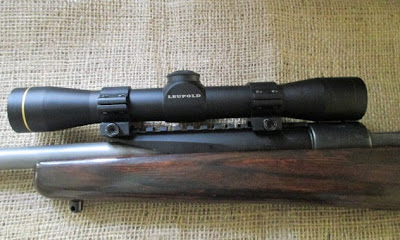 I already owned a Lyman peep sight that would fit the Mauser, so if I liked how this rifle handled and believed I needed back-up iron sights I could mount that Lyman 48 together with a front sight.

Now it was time to start working over the Boyds JRS stock.  Inletting the barrel sleeve was the first step. Here Jerrow’s inletting black was helpful, although as usual more ended up on my fingers than on the wood

The next step was to Acraglas the action and barrel sleeve, being especially careful to use both modeling clay to fill in gaps or screw holes as well as Brownell’s release spray. After the action and sleeve were fitted, I filled in the barrel channel gaps created by turning down the barrel with more Acraglas.

Boyd’s laminated birch stock was generous in its dimensions but needlessly overweight at 2 ¾ pounds, so, after cutting back the fore end to 8 ½” from the front action screw, I cored the butt.  The top line of the grip resembled a ski jump, so I filed down the rear of the receiver tang, rounding the sides to make a gradual transition into the pistol grip.  Doing this completely eliminated the square-bottomed trough in the wood where the withdrawn bolt encounters the wood and much improved the top line of the grip.  Rasping down the grip, shortening its sweep, and using a plane on the sides of the stock removed more excess wood (laminated birch may be stable, but, as I discovered, it can and does tear out).  I then cut enough off the butt to make the length of pull 13 ½” once I added a Pachmayr recoil pad.  Just for pretty, as the Amish say, I added a grip cap of ebony just over 1/8” thick and rounded its edges.

Finishing the stock was straightforward:  I first dyed the wood with a blend of dark walnut and red mahogany aniline dye.  I then rubbed in two coats of alkanet oil.  After waiting several days for that to dry thoroughly, I applied two coats of McCluskey’s spar varnish thinned with mineral spirits, then a full strength one everywhere bare wood was present, including the cored section of the butt.  Then two coats of TruOil, sanding it in after the second coat.  Three coats would have provided an adequate finish, but I decided to apply more to fill the torn-out divots.  I rubbed down successive coats down with auto rubbing compound until the tear-outs disappeared.

For the scope, I found a good deal on a like-new 2.5X Leupold Scout that weighs only 7.5 oz. The 7x57 cartridge is noted for its relatively light recoil—and with its DWM action probably at least one hundred years old I had no plans for hot-rodding my handloads.  As I was not worried about a magnum’s severe recoil, I ordered matte Millett aluminum rings.  Together, the scope and rings weigh just barely over half a pound.  I checked that reticule was centered on the scope and mounted it so its rear is flush with the front of the receiver.

Rather belatedly, I decided to go with a Ching sling.  I drilled a ½” hole for the detachable swivel ¾” of an inch in front of the bottom metal and epoxied in the insert flush with the stock.  Or, I should say, almost flush with the stock:  I had made a mistake in using the plane of the barrel channel as a guide on the table of the drill press.  What I should have done was keep the barrel channel down but shim it so that the underline of the stock became level.  Then the insert would have fit flush, rather than being slightly skewed fore and aft.  And, of course, doing this before finishing the stock would have resulted in a neater outcome.  I reinstalled “regular” swivel studs on the fore end and butt with the detachable one in the middle, so I have the option of using either a regular two-swivel sling or a three-swivel Ching sling.

Here are two views of the result of this project so far.  I still have to figure out a way to give some texture to the grip and fore end--all the glue between laminations would dull checkering tools--and, of course, load up some 7x57's and head to the range.  Those results will be in a later post.

For what I finally decided to do to give some texture to this stock, see http://gerardcox.blogspot.com/2015/04/stippling-gun-stock.html﻿