Faithful readers may remember my series of posts in July, 2013, about putting together a Scout or a Woods rifle, as I preferred to call it.  Following the suggestions of Jeff Cooper in To Ride, Shoot Straight, and Speak the Truth (Gunsite Press, 1988) and of Finn Aagaard in Selected Works (Wolfe Publishing, 2007), I took a DWM 1908 Mauser action with a commercial stainless barrel in 7x57mm, asked Fred Cornell (Custom Shooting Accessories, 570 888-9236) to turn down the barrel and shorten it to 20", and then fitted it to a Boyds laminated stock.   I trimmed Boyds' generous stock dimensions down and used aniline dyes to darken it.  I then epoxied on a XS Systems sleeve and mounted a Leupold Scout 2.5x28 scope just ahead of the magazine.

The result was a handy rifle indeed.  Including the scope and a new recoil pad, it weighs seven and one half pounds.  If some malign fate confined me to only one rifle, the legendary reliability of the Mauser action, the versatile range of bullet weights available in 7mm, and the quick handling qualities of this Scout rifle would almost certainly make me choose this one.

One problem remained:  while hunting with it, the oil-finished stock felt a bit slippery in my hands.  I'd read that the glue in laminated stocks quickly dulls checkering cutters (carbide cutters might have worked, but I didn't have any:  they're expensive), so checkering was not an option.  What to do to get a non-slip surface?

Following a tip I'd picked up from a chat room on the web, I first tried truckbed paint.  This black paint is formulated to be non-skid, and that sounded like just what I needed.  Fortunately, I decided to test it on a junked stock.  It turns out that truckbed paint is indeed less slippery than regular paint, but it drips, runs, and sags when sprayed on the smoothly curving surfaces of a gun stock (see below): 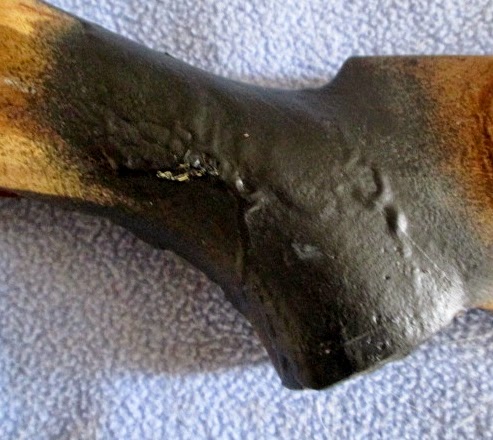 ﻿
So truckbed paint was out.  I then read about using an electric woodburning tool to create a non-slip surface on pistol grips.  Off I went to a hobby store and purchased a Weller Woodburning and Hobby Kit.  Once again, I decided on a test run.  It did work, after a fashion (see below): 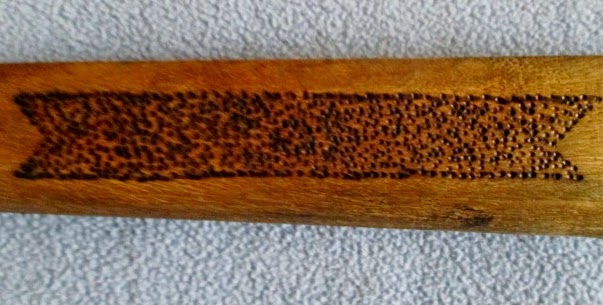 It's not that easy to get your dots in a row for a border--and you also need a lot of them to fill a given space.  Checkering involves a lot of repetition, but this technique is really boring.  To my eye, it doesn't look that great, either.
I then thought of commercial Mauser sporting rifles I had seen:  many of them had the metal of the receiver ring stippled, presumably to cut down glare.  I wondered, are there stippling tools for wood as well as for metal?  There are indeed, and Brownell's carries them.  I ordered the Medium size (16 per inch) and the Fine (20 per inch) stippling punches.  I preferred the Medium size, so I tried to get the hang of stippling on another discarded stock.  Guess what?  Brownell's instructions are much to the point: practicing first does lead to a better result.
What I discovered, however, is that the stippling looks much better when set off by incised lines, just like a checkering pattern.  Given that the punches themselves are about 1/4" in diameter, the borders can't end in the V's traditional to checkering.  I decided simply to round off the panels, the one exception being the bottom of the grip panels, where I followed the typical line parallel to the grip cap.  Several sizes of washers gave me the arcs I wanted to end the panels close to the receiver and on the fore end.
After cutting those border lines, stippling was straightforward.  Just as I do when checkering, I taped all around the borders to prevent an overrun.  If you want to try stippling, I suggest you use light blows with the hammer.  Keep turning the punch so the dots form a random pattern.  If it looks a bit sparse, just do it some more until it looks filled up.  In other words, your eye will tell you when it's right.
The stippling punches created just enough texture to keep my hands from slipping.  Here's the end result after re-staining and finishing the stippling: 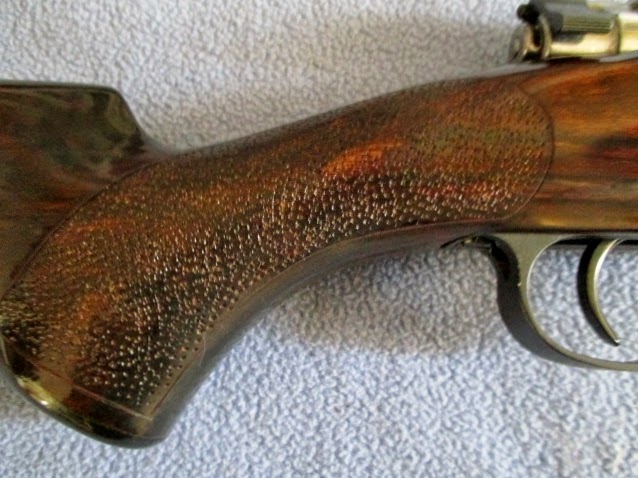