Nearly twenty years ago, I tried to bargain for a consigned Savage 99 in a gun shop.  Its caliber was .250 Savage or, as it was originally named, .250/3000.  I liked its tang safety, but its 20" barrel felt a bit muzzle light to me.  What bothered me even more was its heavy trigger pull.  John Barsness's informative articles on Savage  99's* hadn't yet appeared, so I didn't know then how easy it was to adjust the trigger pull.  The price was $500, as I recall, and I didn't want to go over $450.  The consigner said no deal, and because of its muzzle light balance and its heavy trigger pull I wasn't especially disappointed.

Since then, I have read the two articles by Barsness as well as the book he recommended, John Murray's The Ninety-Nine, 3rd ed. (Westbury, NY, 1985).  As so often happens with firearms enthusiasts, the acquisition of a little learning soon leads to the acquisition of another gun.  Recently, when I came across another tang safety 99 in .250 Savage being auctioned on GunBroker, I decided the time had come to try this legendary rifle and caliber.  Its barrel was 22" long, and I hoped that additional length might solve the muzzle lightness. I won the auction for a bit less than twice what I had wanted to pay for the earlier one (pretty much what I'd expect, given inflation), and this time I was pleased.

Thanks to Murray's description, I could tell before bidding that this was a very late 99-A, made in Westfield, MA, not long before rising production costs forced Savage to drop the 99 from its line.  This one was a revival of the older 99-A, a saddle gun, but without the saddle ring.  It featured a tang safety, Electro-Cote coating instead of bluing, and unlike earlier 99's it was drilled and tapped at the factory for a scope. It retains the magazine rotor, but one made of stainless steel rather than the traditional brass.

Most important for my intended use of deer hunting, this reincarnation of the 99-A in .250 Savage has 1 in 10" rifling, so it should stabilize a 100 grain bullet.  Designer Charles Newton apparently had wanted this twist in the first place for a 100 grain bullet at about 2800 fps, but Savage wanted to exploit the 3,000 fps obtainable with an 87 grain bullet, so the publicity value of the first American rifle to achieve 3,000 fps outweighed any ballistic disadvantages from the slower twist and lighter bullet.  [For reloading the earlier 99's with a 1 in 14" twist, see the articles in Handloader by Barsness* and by Terry Wieland#.]

The rifle arrived, exactly as advertised.  I ran some dummy rounds through the action, tested the safety, tried the trigger--the pull was even heavier than the earlier one, I'd guess somewhere in the region of ten pounds!--passed the background check, and took it home.  Some Wipe-Out removed quite a bit of fouling from its barrel.  I took off the butt stock so I could lighten the trigger pull.  Taking a deep breath, I turned the bolt screw counter-clockwise.  It worked:  the trigger pull was lighter!  Thank you, John Barsness!  I lightened it some more.  We'll see if it holds there.  If it moves, I'll follow Barsness's suggestion  to keep it in place with a washer.

I then looked at the butt stock and fore end.  The latter had some factory plastic filling the gap between the action and the fore end.  Time is money, of course, so this probably was  a cost-cutting measure, taking less time than fitting the fore end to the action by hand.  I'm not keen on that plastic, but it is invisible.  What was visible was the outline of a snarling panther a previous owner had incised on the left side of the butt.  I'm not a fan of gunstock carving, but whoever had done this was quite a good artist.  I rather liked it, but you had to tilt the rifle to catch the light for all the lines to show up.  I knew I couldn't cut the lines any deeper without screwing it up, so with no small degree of reluctance I sanded the panther to oblivion.

Like every other 99 I've ever picked up, this 99-A had a short length of pull.  As early as 1918, Townsend Whelen pointed out in The American Rifle that Savage stocks were about a half inch too short to fit the average man, but apparently nobody at Savage ever saw reason to change.  (How tall was Arthur Savage, anyway?)  I'm six feet tall and have a 35" sleeve, so I decided to cut off the curvature of the butt and to install a 3/4" recoil pad, giving me the 13 3/4" length of pull I like.  I did want to duplicate the pitch of the butt, hoping that this would help keep the butt on my shoulder for a follow-up shot, so I used a sliding bevel to replicate the original angle.  Making sure to tape the underside of the butt to prevent it from splintering, I put the butt stock in a miter box and shimmed it until the saw blade followed the line I had marked with a China pencil.  Cutting it off was straightforward.

The lines of the butt stock looked a bit off to me, so I picked up a straight edge.  The line of the comb was straight, but the underline of the butt--the belly, as it's sometimes called--wasn't.  Not as pronounced as a fish belly, which has its own opulent Victorian charm, the curve just represented careless attention to detail.  A few minutes with a block plane took care of that problem.

The more I looked at the stock, however, the more I thought its proportions were out of whack.  The chief problem was that the flared cheeks behind the action (the portion in front of the wrist) came too far back.  As a result, the back edge of the cheek interfered with my trigger finger.  That the lines were dubbed over as a result of mass production didn't help the stock's appearance, either.

The solution seemed to lie in shortening and delineating the stock's panels.  I got out some French curves and found one that had the right scale for that portion of the stock.  I decided to have that section end farther forward, in line with the back of the trigger guard, and to echo both the trigger and the top of the wrist with a slightly downward curvature.

Here is a photo of the planned alteration.  The line with dashes indicates the way it left the factory; the solid line represents the curve I was going to follow in re-cutting these panels. 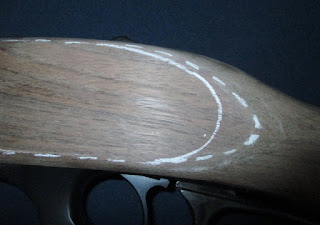 I also slimmed down the area right behind the receiver tang, removing as much as I could of the hump just visible in the photo above.

Here's the butt stock after cutting the new panels, mounting the recoil pad, and refinishing.  The aniline dyes followed by alkanet oil have given the bland wood a richer tone: 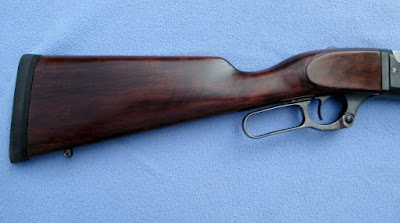 These altered panel details probably wouldn't be noticed by anybody other than a Savage collector or another stocker, but to me they improve the flow of this rifle's lines.  The rear of the outward flaring portion is now far enough forward that it no longer interferes with my trigger finger.  I like the crispness of the newly defined panels, but if I were to start over again, I'd move them forward just a little more, perhaps making the curve line up with the trigger rather than the rear of the trigger guard.

﻿
Given that this later 99-A was factory drilled and tapped for a scope, I've mounted a Leupold VX-3 1.5-5x20mm in the pleasingly old-fashioned Weaver rings.  Scoped, it weighs one ounce over eight pounds.

Here's a photo of the entire rifle:

Now I've got to load some 100 grain bullets and sight it in.  I am hoping Dame Fortune lets me find a whitetail with it in Maine this fall.

Our Black Lab puppy Bête Noir is exuberant, perhaps even excessively so, in nearly every way except one:  she has shown no interest in swimming.  Thanks to our friend John Bailey and his two water-loving dogs, Keel and Buddy, Bête at nine months learned to wade in a pond, but she was emphatically not going to follow their example and swim.  She remained a wader, and not even a very deep-water wader at that.

Now, I don't want you to get the impression that I was concerned about this characteristic of hers.  I was completely reconciled to owning the only Lab in the entire US that didn't swim.  I told myself that it wasn't really that big a deal:  I could always shave, and then none of my friends would recognize me, any more than they did after I grew a beard.  So I was stoically prepared to have a non-swimming Lab.

Several days ago, just after Bête became nine months old, the two of us went out to Jennings Pond in Danby, NY, where there is a swimming beach marked off with guard ropes.  It was late enough that the life guard had gone home.  Given that Bête always wants to go where I go, I reasoned, I would wade around with her and at some point perhaps wade out to where she would have to swim. As we splashed around together, she gradually waded in deeper, to the point where she could just touch the fine gravel bottom.

Then she decided it would be fun to bite the little buoys spaced every three feet or so to keep the swimming area's boundary lines afloat.  I did say that she's exuberant, right?  Starting about ankle deep, she lunged and bit the first one, in a foot or so of water.  She then lunged and bit the second one, in a foot and a half or so of water.  I hit the third one with my hand to give it some motion, and she lunged for it, mouth agape.  Surprise!  No bottom under her paws!  She look startled but not scared as she dog paddled forward and bit that buoy as well, then turned around and swam back to the bank.  A few minutes later, in she went again, and she appeared altogether comfortable swimming from then on.

Caroline said after I got home that I was beaming like a proud father!
Posted by Gerard H. Cox at 9:32 AM No comments: