Part II:  Planning My Woods Rifle
With the clarity that sometimes comes when you wake up at 3am, I realized that I already had a rifle that I could make over into a Woods rifle.  It was a 7x57 Mauser sporter that I had consigned to a local dealer.  It had not sold, so I had taken it back..  It consisted of a DWM 1908 Mauser action with a 24” medium weight stainless barrel in a Boyds laminated wood stock.

Although this rifle retained its two-stage military trigger, its let-off was crisp.  It also had a pleasingly swept-back bolt altered to clear a scope, and a Buehler safety.  I had bought it from an auction on GunBroker.com, and the problem was that I had neglected before bidding to ask what it weighed.  For my purposes, it was simply too heavy:  adding a scope to its one-piece mount took the scale past nine pounds.  My first idea was to turn it into a rifle W.D.M. Bell might have used, but as I began calculating what it would cost to add iron sights and perhaps an original bolt shroud and safety plus, of course, a walnut stock, and then perhaps a modern finish like Cerakote that would darken its stainless barrel, the expense made that idea go glimmering.  Sometime later, however, the penny dropped:   I suddenly realized that converting this too-heavy rifle into a general-purpose one might be its highest and best use, with one major qualification:  this would not be a quasi-military Scout but a handy rifle for hunting in the woods, a Woods rifle.

Mausers are hell for stout and thus are far from light, so I had no illusions about making Cooper’s ideal weight of six and three-quarter pounds.  There was no reason, however, that it couldn’t be well-balanced, relatively short, and therefore handy.  One feature in its favor, as far as I was concerned, was that there would be no protruding magazine.  (This is the only reason I didn’t decide instead to work over an SMLE that had already been converted by someone else to a sporter and was therefore inexpensive.) Without a protruding magazine, and with the scope forward of the receiver, I could carry the rifle at its balance point with my thumb over the action, far and away the most comfortable as well as the quickest one-handed carry to the shoulder.

I began to jot down a to-do list.  The 24” barrel would have to be turned down to lose weight.  I decided to have it shortened to 20”, in part to balance visually the 13 ½” stock length (1/4” shorter than usual for hunting in late fall in ME) and in part to lessen muzzle blast (it’s interesting to see how many chat-room comments complain about how loud the muzzle blast is from the 16 ½” barrel on the .308 Ruger Gunsite Scout).  The full-sized laminated stock with its 14” LOP would have to be cut shorter at both ends.  A better recoil pad was called for, as well.  I also decided to add a extended floorplate release button (available inexpensively from Midway), so I would not have to mess around with the point of a bullet to remove the floorplate.  The button protrudes slightly, but it is close enough to the front of the trigger guard not to be in the way when carrying the rifle.  One could save weight by having a blind magazine, but I wanted to retain a detachable floor plate. If a cartridge becomes jammed in the magazine, I reasoned, it’s much easier to clear it when you can detach the floor plate. 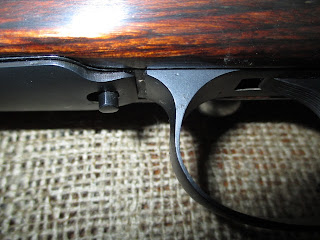 The major problem in converting a conventional rifle to a Scout has always been mounting the scope.  A new barrel could be turned with integral mounts, but that of course is expensive.  Another solution is adding the quarter rib from the Ruger No. 1:  less expensive, but that steel rib adds weight.  A few years ago, XS Systems began to offer an aluminum sleeve to fit over the barrel.  This solution is light in weight and relatively inexpensive at $60, though that does not include the cost of turning down a commercial barrel.  (In these terms, the cheapest solution would be to use a military Mauser barrel, as the XS/Clifton sleeve is designed to fit its progressively stepped down contours.) 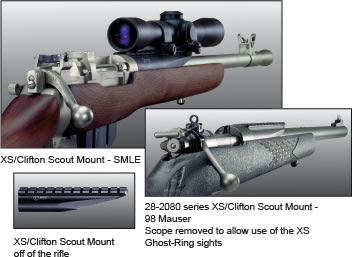 I decided to go with the XS Systems sleeve.  I already owned a Lyman peep sight that would fit the Mauser, so if I liked how this rifle handled and believed I needed back-up iron sights I could mount that Lyman 48 together with a front sight.
Posted by Gerard H. Cox at 8:34 AM