Let me say at the outset that I'm writing as a novice about browning Damascus shotgun barrels.  I've previously browned exactly one barrel, a Getz octagonal barrel for my .50 Pennsylvania long rifle, and of course that was a new barrel, not an antique one, and it was steel, not the twisted combination of iron and steel that defines Damascus.  So why, you may be thinking, should I write about doing this for the first time? Simply because I'm going to record both what I do wrong as well as what I do right--that way, I may save some others from replicating my mistakes.

There is a lot of information on the web about Damascus barrels, everything from how they were made to identifying types of Damascus construction to how to refinish them.  I had managed to compile a sizable folder of this information, but then a virus struck my computer and I lost it all. But I had already decided not to make my own browning formula, so I simply ordered Laurel Mountain Forge's Barrel Brown and Degreaser.  Their instructions on the web are critical, especially their caution against rubbing the surface with multiple coats:  that can cause a metallic copper colored film to form, which impedes the browning process.  This particular Barrel Brown offers the advantage that the surface to be browned does not have to be entirely free of oil, as the formula cuts through that.  Several sources on the web noted, however, that for Damascus barrels at least the initial application of this solution should be diluted 50% with distilled water.

Another useful source for browning is Oscar Gaddy's A Rust Blue Primer (the steps one follows for a rust blue are the same as for browning--up until boiling the barrels, which turns the red Ferric Oxide to the blue-black Ferric Ferrous Oxide, better known as a rust blue).

Like many aspects of gunsmithing, the process is relatively simple.  Doing it well is another matter. That's where experience counts, and experience may be considered as the ability to have learned from your mistakes--and no small part of that is knowing how to correct the mistakes you've made.

Here are my Scott's barrels in a "Before" shot:  the browning has pretty much disappeared.

The first step was to remove what little remained of the old finish and get a relatively smooth surface.  I started with 220 grit on a sanding block and followed Gaddy's suggestion to stop polishing with 320 grit.

Next came degreasing.  Even though Laurel Mountain Forge claims that this step is not necessary, I decided to do it anyway.  I had bought at a hardware store some rubber stoppers to plug the barrels, but they fell out all too easily.  I returned to the store and bought some corks.  These were not a great fit, either, but I sanded them down until they stayed in place.  After putting on vinyl gloves (check to make sure they don't have powder on the outside), I first flooded the barrels with Formula 409 and then rinsed it off with hot water.  When that had dried, I rubbed the barrels down with a cotton pad moistened with rubbing alcohol.

Two things I learned from degreasing are that you have to figure out 1) how to support the barrels while you apply the solution, and 2) how to support them during the time they rust.  I suspended the barrels from a parachute cord slip-knotted to the underlug and looped on a nail in the garage (there's more humidity outside).

I cut Laurel Mountain Forge's Brown 50-50 with distilled water.  Wearing vinyl gloves, I applied the solution with the 1" foam brushes Gaddy recommends.  Using a foam brush didn't work for me:  I couldn't control the amount of solution I was applying.  I quickly learned that to avoid runs I had to apply the solution horizontally, not vertically.  Try to cover evenly, overlapping as little as possible.

The length of time it takes to rust obviously varies with the temperature and the humidity.  In Ithaca, NY, during a rainy week near the end of May, I began by checking on the rusting after three hours or so.  Laurel Mountain Forge suggests not letting the rusting process go past 24 hours, or pitting may develop.

Card off (that is, rub lightly) the barrels under running water with degreased steel wool (I prefer Lee Valley's extra-fine steel wool, as it comes already degreased).  My first attempt turned out gray, not rust brown, and rather streaky.  You can't have made a mistake, I thought to myself, so I took a deep breadth and kept on trying.  I dried the barrels:  using hot water makes this faster.  I discarded the foam brush and substituted a cotton sterile dressing, folding it into a pad.  Again, I took long horizontal strokes the length of the barrel.  Being careful not to touch the wet barrels, I suspended them to rust for five hours.  More applications, rusting, and carding followed, and a light brown color began to emerge.  Re-applications made the brown deeper in color and more even.

Here's how the barrels looked after seven applications: 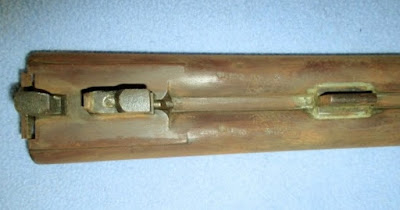 Following Laurel Mountain Forge's suggested procedures, I carded the barrels and then neutralized the surfaces with baking soda dissolved in hot water.  I rinsed that off with more hot water and allowed the barrels to air dry.

Next came oiling.  I heated the barrels over a gas stove until they were uncomfortably hot to hold and rubbed in a coat of motor oil (10W-40 is what I happened to have on hand). After 12 hours, I wiped off the motor oil with a clean cloth and applied a sparing coat of CLP BreakFree inside and out.  Here's how they came out:

I really liked the richness of this brown, but it rather obscures the Damascus pattern.  You have to look hard to see it.  Etching the barrels would bring out the contrast between the iron and the steel, but I couldn't decide whether I wanted to do that.

The next day, after re-assembling the gun, I decided that the barrels looked too good, too new.  They needed to lose some of that rich luster.  I first tried rubbing them with extra-fine steel wool--it didn't make that much of a difference.  I then thought of auto polishing compound, which is less abrasive than auto rubbing compound.  I applied the polishing compound on the underside where it wouldn't show if it turned out to be a terrible idea.  I liked its effect, so I polished away.

Here's a view of the polished barrels.  Only one barrel and the rib are in focus, but you can see that the contrast between the iron and the steel has been markedly improved by the auto polishing compound: 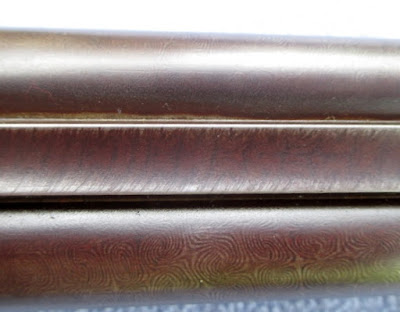 My last step consisted of warming the barrels with a heat gun and then applying two thin coats of Renaissance Wax, buffing each coat.  The barrels now have a low luster.

In my view, the barrels now look right for the effect I want:  not a shotgun that looks as if it  had just left the Scott factory yesterday, but one made in 1887 that's been used pretty hard but been cared for.  Here's a shot of the barrels and part of the action.  Rather than one element standing out, they all seem to go together: 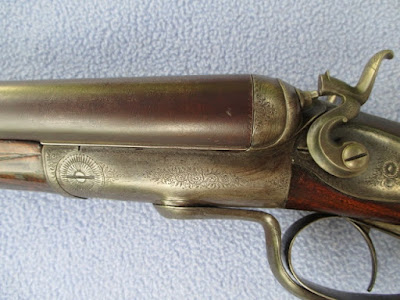 Remodeling a BRNO Mauser, Part 8: Putting It All Together

In my previous posts, I have concentrated on the various elements of remodeling this 7x57 Mauser: reworking the stock, say, or bedding the action.  Now, everything is about to come together, and I am hopng, as I always do at the end of one of these projects, that the whole magically will become more than the sum of its parts. For me, at least, this final assembly typically involves some pesky last minute adjustments before the magic can happen.  In this case, I had to remove some stray AcraGlas to make the bottom metal fit properly again.

I'm planning to shoot the BRNO first with iron sights, partly because I like the look of a rifle uncluttered with a scope, partly because the rifle will weigh at least three quarters of a pound less than it would with a scope, and partly to see whether my aging eyesight can manage one minute of whitetail deer.  What this means in practical terms is whether I can still keep all my shots at 50 yards on an eight-inch paper plate--offhand.

Although the BRNO lacked a front sight when I bought it, it did come drilled and tapped for a Lyman 48.  Fortunately, the RS model Lyman 48 I already owned fit this Mauser 98 perfectly, so that's what I'll try.  If I no longer see well enough for iron sights, I can always take off the peep sight and mount a scope, making use of the BRNO's tapped holes for Weaver bases.  As I mentioned in an earlier post, despite my amputating the Monte Carlo comb, the comb is still high enough that I can use a low-mounted scope.

Here's a shot of the altered pistol grip, the receiver with the Lyman 48, the checkering, and the shortened fore end with a barrel band.  The magazine release is just visible, and as I said in an earlier post I've swapped the two-stage military trigger for a Timney I already had on hand.

The finishing touch, so to speak, wasn't a matter of seeing so much as a matter of feeling.  After assembling the rifle and holding it muzzle down in my right hand, I noticed that the edges of this Lyman peep were digging uncomfortably into my hand.  Looking more closely, I saw that the edges had been chamfered, but only minimally.  Following a suggestion by E. C. Crossman in The Book of the Springfield (1931), I picked up a needle file and in a few minutes had softened the edges of the sides and the adjustment knobs.  Some cold blue made it look new again.  It's surprising how much difference a little detail like this can make.


Looking back to the beginning of this project, here's the BRNO as I bought it, complete with a Monte Carlo comb, a bulky, closed pistol grip, and an extended, angular fore end (the odd bump on the bridge is a Weaver scope base):

And here's where we've ended up: a new front sight, set back a tad in the English style, and a Lyman 48; a barrel band for a sling; a slightly truncated fore end to balance the 21 1/2" length of the barrel; and a more open pistol grip together with a much altered butt stock, a recut cheek piece, and a new recoil pad.  And now the much slimmer stock is checkered:

This BRNO 7x57 now fits me.  It balances just the way I like, very slightly muzzle heavy.  Unloaded, its balance point is five inches in front of the trigger.  It feels lively in my hands.  Almost as important, it is very close to my Platonic ideal of a bolt action sporter, an elegant and altogether personal rifle.  Its styling is conservative:  I like to think that Bell or Corbett would have approved of this 7x57.  I'm looking forward to practicing with it and then taking it afield.  In the meantime, I am deriving pleasure from just holding it in my hands and dreaming big dreams!