O. F. Mossberg and Sons has just announced the production of its ten-millionth Mossberg 500 pump gun, a remarkable number given that production of this model only began in 1961.  My own experience of using a Mossberg 500 goes back some 15 years or so.  At that time, I decided that the best solution to the slug shotgun-only requirement for deer hunting in Tompkins County (NYS) was a Mossberg pump with a barrel rifled for sabot slugs.  As someone used to bird shooting with doubles, I liked the position of the Mossberg’s safety on the rear of the receiver, approximately the same as on the tang of a double.

It would be a 20 gauge.  I saw no reason to get a 12 ga.:  I wasn’t going after Cape buffalo but white tailed deer, and a 20 ga. Winchester Supreme slug—actually a .454 Casull bullet in a sabot—at an advertised 1750 fps would do just fine.  I found a used 20 ga. 500 in excellent shape at a gun show and bought it.  Its birch stock with impressed checkering was no thing of beauty, but it was functional, offering a choice of two comb heights.  Its rifled barrel had a cantilevered mount for a scope.  I bought a used Leupold shotgun scope for it. 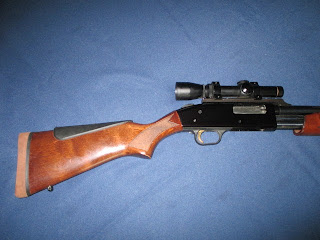 I added a new recoil pad and a sling, as I find it awkward to glass while holding a gun.  When I’m patient enough to glass carefully, I often can see deer before they see me.  That advantage goes a long way toward putting venison on the table.

But, about five years ago, I began hunting deer not only locally but in Maine with my close friend Mike Bennett.  One day in Maine, filling the gas tank in the rain, I must have looked pretty woebegone because a complete stranger asked me if we’d had any luck. On hearing my emphatically negative reply, he offered to show us a good place to hunt.  Not only did he take us there, but he hiked all over it with us in the rain, getting completely soaked in the process.  It was a spectacular act of kindness.


It is indeed a good place, but that area specifically requires that deer hunting must be with smoothbores only.  I’d been happily hunting with rifles in Maine, but in this new place neither they nor my rifled Mossberg would be legal.  I did have another smoothbore suitable for deer, but it was an Indian trade flintlock I’d put together when I was bewitched by the idea of re-enacting the French and Indian War period.  It was a single shot, of course, and I’d already learned the hard way that flintlocks are not the firearm of choice when it’s raining.
The best solution seemed to be ordering a smoothbore slug barrel for the Mossberg.  It cost something on the order of $120, and it was dead easy to install.  I sighted it in at 50 yards and felt good to go off to ME.  Despite the saying, “One shot, meat; two shots, maybe meat; three shots, [you fill in the blank],” I felt more comfortable with a repeater (indeed, once near home I’d inexplicably missed a buck with my first shot and dropped him with a second, something that would not have been possible with the slow-to-load flintlock), and rain would pose no problem.  As it turned out, however, during our next two annual hunts, Mike saw the only deer, and, using my flintlock instead of his more customary original Spencer or Sharps rifles, he didn't connect.


Then, this April, Boyd’s sent me a catalog of semi-inletted gunstocks, and as I leafed through it I noticed that a walnut butt stock was available for a 20 ga. Mossberg 500 for just under $60.  My experience with a pump gun is limited, but I did recall a comment by Gene Hill in his Shotgunner’s Notebook.  Noting the importance of stock dimensions for shooting well, Gene Hill praised the superb dimensions of the stocks John M. Browning designed, adding:  “Gun handling facility is the same regardless of the action.  The Brownings I just referred to are the old autos and pumps.  The old Winchester Model 12 at one time had the option of a straight stock—and that’s what I used for quite a while shooting trap.  I believe that the old Model 31 Remington pump was also offered with such a stock.  I certainly wish the new ones were, along with a couple of other options such as length of pull and a bit of cast.”  Hmm, I thought, why not cut the pistol grip off the Boyd’s replacement stock and give it a straight stock?  As I planned to install a recoil pad, getting the LOP I wanted would be no problem.  I doubted I’d need much cast-off, but if I did, that also would be no problem.
When the butt stock arrived, I cut off the pistol grip.  I then trued up the lines of the stock (the underline especially had a hint of fish belly, which might look right on a Win. M ’97, but not on a contemporary gun like the Mossberg 500).  I then installed a Limbsaver pad (with a sports-injured shoulder, I am a wuss about recoil, and in a light gun like the 500 that Win. Supreme load kicks like a mule).


I finished the stock, following the steps described in my earlier post on building a woods rifle.
Boyds unfortunately does not offer a walnut fore end.  For the time being, I contented myself with sanding down the former impressed pattern and simply re-checkering that outline on the birch fore end.  On the butt, the checkering pattern gave me pause.  Eventually, I decided to experiment with something other than straight lines terminating the checkering close to the receiver.  Here's the checkering before dying and finishing it. 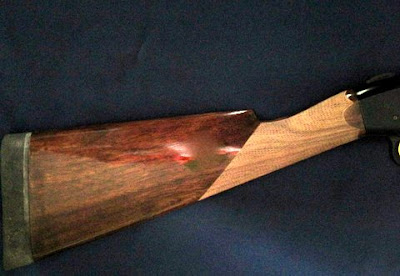 The larger quasi-ellipse is meant to carry the lines of the receiver into the stock, while the two others above and below replicate it in miniature.  Later, I may slim the fore end down and try to make it more graceful as well as less bulky.
Up to this point, I had been assuming I’d continue to use the smoothbore barrel’s open rear sight.  I was no Hawkeye with those open sights, but I’d proved to myself that offhand I could keep my shots on an 8” paper plate at 50 yards, and that level of accuracy is all you need (that, plus seeing a deer within range, of course).  Then, one day, I suddenly noticed the plug screws on the Mossberg’s receiver.  Their spacing reminded me of the screw-on base that had come with my Ruger 10/22.  And yes, indeed, the two rear screws appeared to match the spacing in the base.  That meant that I could attach it with two screws to the receiver and then attach to that a sight I already owned, a NECG aperture sight made for grooved .22 receivers that I’d bought used a year ago, simply because it was too cheap to pass by.  Here is the NECG aperture sight. 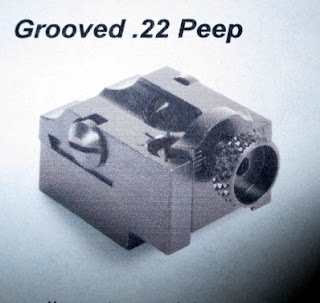 I had to fuss with the plate a bit, enlarging the holes slightly, cutting it down, and re-blacking the aluminum, and then I used Threadlocker Blue on the screws to fasten it to the receiver and added the peep.

Suddenly my Mossberg 20 gauge was becoming a remarkably versatile gun for deer.  With its rifle barrel and cantilevered scope, it was perfect for hunting near home:

Alternatively, with its 24” barrel, peep sight, and a straight grip stock, it could be an accurate smoothbore for deer.

And, if the goddess Fortuna ever smiles on me in the Maine woods and I manage to tag a deer, I can easily remove the NECG sight and have a perfectly usable grouse gun.

Given its straight grip and the unique checkering pattern, I doubt there’s another Mossberg 500 like it.  That’s why, following at a distant remove the example of the 1873 Winchester 1 of 1,000, I like to think of my 20 gauge Mossberg 500 deer gun as One of Ten Million.

Afterword:  Unfortunately, when I tried to sight in the Mossberg with its peep sight, it shot way too high, even with the peep depressed as far as possible.  I needed a much higher front sight.  That seemed like more trouble than I wanted to take on, so I took off the Ruger base and added a Weaver base for a scope.  That works fine.  Now I'm hoping to find a deer.