Blood on My Hands: A Shameless Self-Promotion

If you're a hunter, if you've ever wondered why on earth other people hunt, if you're at all concerned about animal rights or animal liberation, or if you're concerned about the destructive impact our species is having on the earth, you might want to read my book that will be available shortly from Amazon:  Blood on My Hands.

I came to write this book because of a hunting experience that shook me to the core.  Hunting by myself, I stalked and killed an antelope in Wyoming.  It was the first animal I'd ever shot.  After dressing it out, I looked at my watch to see what time it was.  My arms were so covered in blood that I couldn't read my watch.  Then I heard myself saying aloud, "I have blood on my hands!"  I had no idea what I meant, but I felt marked by this blood.  I kept thinking about that blood the rest of the day and I kept dreaming about it again and again that night.  When I woke up the next morning, I was certain about one thing:  I had to figure out what this blood meant.

Figuring it out completely took a good ten years.  This book is less an argument than the record of a process of discovery, a process I tried to indicate in the subtitle:  How Hunting Led Me to Question Our Relationship to Animals, Discover that DNA Unites Us All, and Realize that We Have to Expand Our Understanding of Ecology and Take Responsibility for the Earth.

If Blood on My Hands sounds interesting, check it out on Amazon:

Email ThisBlogThis!Share to TwitterShare to FacebookShare to Pinterest
Labels: Blood on My Hands, Cox

A Windsor Armchair: Genuine or Fake?

Last week, I discovered a Windsor armchair in a local shop at a bargain price.  In fifty years of looking for American eighteenth century furniture, this is the first Windsor I'd ever seen that I could afford, so I had to restrain myself from pulling out my wallet and running up to the cash register to buy it.  But then I got cautious:  its asking price was so low, something had to be wrong with it, right?  It could be a fake.  I decided to look it over carefully.  Here's what I saw: 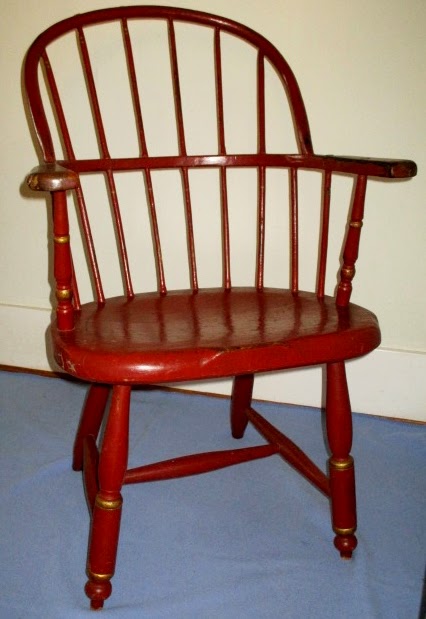 My first impression was that the red paint with gold pin striping and some turnings picked out in gold was in remarkably good shape.  Bringing an older wooden chair up to date with new paint is something most of us have done at one point or another, but I recalled that this combination of red paint with gold striping was popular in the first half of the nineteenth century.  If the paint indeed dated from that period, how had it remained in such good condition?  That was a bit suspicious.  I looked more carefully at the spindles:  they too had gold striping, so faint it was almost worn completely away.  That wear was reassuring.

I could see that the back railing and arm railing had suffered through the years and been repaired.  Some sections of the arm rail needed to be glued.  One of the back legs had broken off, been reglued, and in addition it had been reinforced with the kind of angle iron available at any hardware store.  So it wasn't perfect.  That was reassuring.  Few fakers would break off a leg and reattach it just to make a piece look antique.

The front legs had a cylindrical portion that I vaguely associated with Windsors made in Pennsylvania, but their feet seemed a bit odd.

I then realized that the back legs didn't match the front ones.  I had never really studied Windsors, but as far as I knew, the legs always matched.  These don't (the angle iron brace can also be seen here): 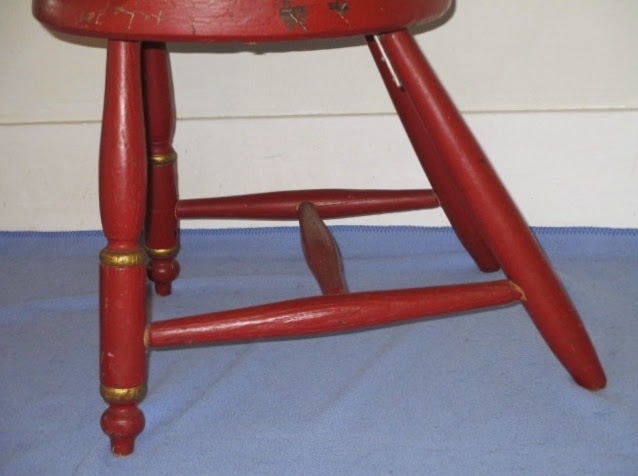 
The arms were eked out with another piece of wood of the same species to form handholds. I wasn't sure which species of wood had been used, but the grain had been carefully matched and the additional pieces had been pegged in place from the side.  Here you can see how the tops of the arm supports have been split to take a wedge at right angles to the grain of the handhold, a technique often used in the eighteenth century:

The red paint was completely worn away; so too the earlier paint--black? dark green?--I could see elsewhere on the chair where the red paint had been chipped away.  As the photo shows, one handhold did have a little bit of yellow still remaining.  Had that been an undercoat, or what?

The back had six spindles extending to the top railing.  I had a vague memory of reading that Windsors always had an uneven number of spindles.  This one didn't.  Very well then, this one didn't.

Finally, I looked at the chair and tried to get an overall impression of its form.  Chunky, I thought at first, the chair was a bit chunky.  The front legs didn't have much splay, but the back legs, although heavy, had a good rake to them.  The seat was barely contoured:  hollowed out a bit in the center, with minimal sculpting where the thighs would rest.  The seat was tilted, however, not horizontal, so its stance appears to offer comfort rather than upright rectitude.  The arm supports were turned but not dramatically so.  The center and side stretchers were even less noteworthy:  the turnings were swelled, but minimally, nothing dramatic.  The more I looked at the chair, however, the less accurate "chunky" seemed.  Understated, perhaps.  Nothing about it said, "Here I am!  I'm important!  Look at me!"  The chair just sat there, quietly confident, so to speak, that it was what it was, a comfortable chair.

So, despite its not having an uneven number of spindles and its back legs not duplicating the front, and despite my not knowing where it was from, I decided it was a genuine eighteenth century Windsor, not a fake.  I happily paid the asking price.

Once home, I began to go through my furniture books to find material on Windsors.  Helen Comstock's American Furniture (1962), Jonathan Fairbanks and Elizabeth Bates's American Furniture 1620 to the Present (1981), and Charles Santore's The Windsor Style in America (1997) turned out to be the most informative of the ones I owned.  Santore's two volumes-in-one also include his portfolio of drawings with really helpful details.

Leafing through Santore,  I was delighted to find a drawing corresponding closely to the front legs of my chair.  It's the middle one below from Lancaster County, PA, and Santore gives the dates of 1765-1780 for this cylinder-and-ball leg (the foot is often called a blunt-arrow foot): 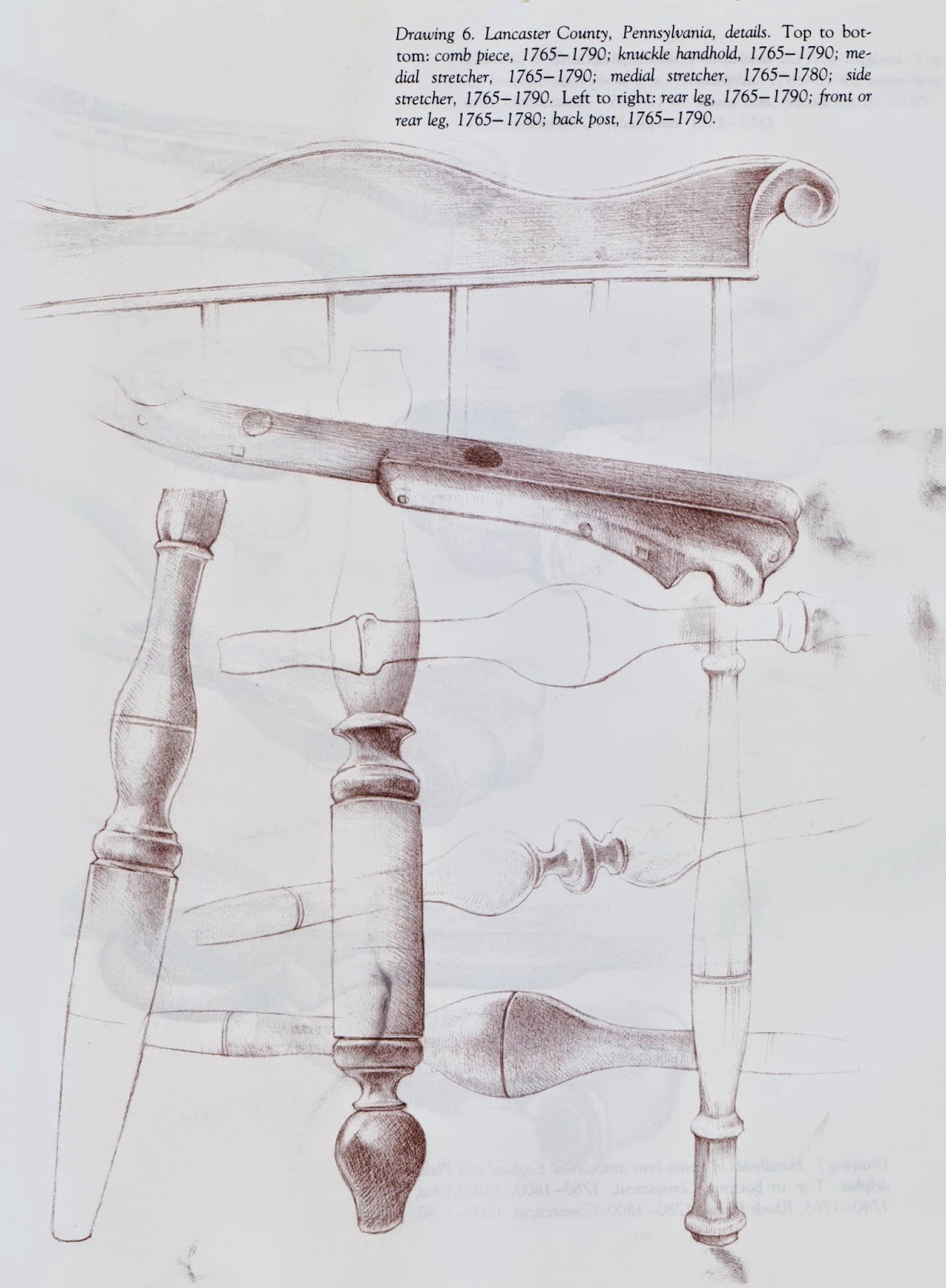 I then went up to the Cornell library to check out Nancy Goyne Evans's American Windsor Chairs (New York, 1996), a truly massive, authoritative work, one of three she's written on Windsors.  One chair (Figure 3-63) has similar front legs and feet to mine, although its stretchers are considerably more dramatic; she identifies it as from the greater Lancaster County region.  Evans also points out the stylistic discrepancy between its front and back legs, noting "this unprecedented union of two support designs in one chair" (111) in the Lancaster area resulted from these rural craftsmen tenaciously holding on to features long outdated in urban centers.

Presumably, the front legs are the ones no longer fashionable in Philadelphia and other cities, for the rear legs correspond to the tapered ones that became widely used.  Part of this wide use is probably due to the greater ease of turning such a leg as well as the slightly greater latitude it affords in placing the side stretchers.  Another conservative aspect of this chair is that the seat is thinner at the back than at the front by  1/4."  That difference, plus the tilt of the seat--18" off the floor in front, but only 16 1/4" at the back--make it the Windsor equivalent of what used to be called a lolling chair.

Both Santore and Evans agree on the dates of 1760-80 for this style, but  the heavier back legs and stretchers on this chair may well suggest a date near the end of this period, perhaps near the end of the 1780's or even a bit later.  By the turn of the nineteenth century, square-back, "fancy" chairs had become fashionable, so it's unlikely that this chair was made after 1800.

In Lancaster County, Evans points out, in the second half of the eighteenth century, 85% of the woodworking craftsmen were German.  It's highly likely, therefore, that this chair was made by a Pennsylvania German.  It might also have been owned by a Pennsylvania German family, if we can judge by the later red and gold repainting.  In Plate III, Santore illustrates a 1780-1800 Windsor chair with yellow striping over red paint like that on my chair, also equally well preserved, commenting that "this color combination is typical of Pennsylvania German decorated chairs of the 1830's and 1840's."  As everyone knows, Lancaster County is still renowned today for its Pennsylvania Dutch--"Deutsch"--heritage.

Given its front legs with cylinder-and-ball legs and its tapered rear legs, this Windsor conforms to the style popular for sack-back chairs in Lancaster County in the second half of the eighteenth century.  Any bargain should be looked at skeptically, but at rare intervals the planets coincide and a chair like this Lancaster County Windsor turns out to be genuine. 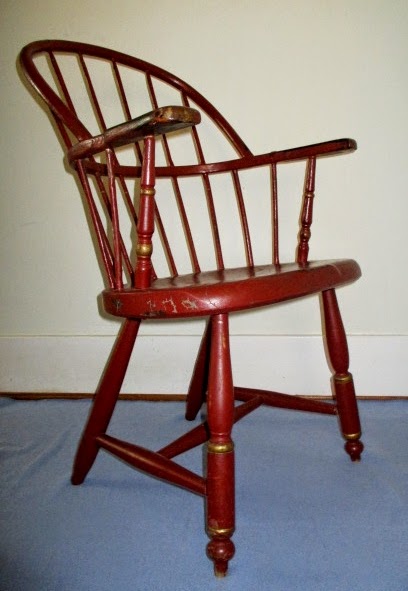 ﻿
If anyone knows of similar examples, please let me know!

Not only do the Mouats offer something like 5,000 reprints of gun catalog from makers and merchandizers, but their newsletter is free and filled with interesting material, some relevant to firearms and some not:  the current one has a video of a Toyota SUV being driven on two wheels while five or six Saudis take off and then replace the two other tires--incredible!  I'm hoping my grandson doesn't see it!  And the Rants and Raves every month are always worth a chuckle.

Check them out:  they provide a wonderful service at very reasonable cost.

The New Fly Fisher zine and Yours Truly

Reluctant as I am to seek publicity, full disclosure requires acknowledging that several photos of me have appeared in Ian Martin's informative article on fishing caddis flies, "All Hail the Caddis!", in The New Fly Fisher zine (Summer, 2014).  Ian and I were fishing the upper Grand River near Fergus, Ontario, at the time, several years ago, and Ian positively refused to let me put on the balaclava I typically wear to elude the paparazzi.  He did agree, however, to show as little of my face as possible.  So, if you want to check it out, click on  the page number in the table of contents, or page through to Ian's article (p. 134):  I'm the one wearing the blue shirt.

Anonymous photos of me aside, The New Fly Fisher zine has knowledgeable articles, wide coverage, and excellent photography.  Best of all, a subscription is free.