I suspect I'm a wood butcher at heart, because one of the aspects I love most about messing around with rifles is hacking away on their stocks, trying to realize my ideal of the entirely personal, elegantly functional tool.  In fact, a friend once remarked to me, "Given that you like to work on stocks so much, Gerry, why don't you save money and just buy stocks instead of the entire gun?"

From one point of view, remodeling a rifle stock is like making a statue out of a block of marble:  you just cut away everything that doesn't belong there.  That's all well and good, but how do you know when you've gone far enough?  My best answer now is, If you aren't terrified that you've cut too much away, you haven't gone far enough.

So here's the beginning of the surgery on the BRNO sporter:

Using first a bandsaw and then a plane, I cut away nearly all of the Monte Carlo comb; you can see a slight drop still remaining behind the cheekpiece.  I'll switch to a block plane for the last bit.  Eventually, I will be able to lay a straightedge on the comb and have all of it be in the same plane.
The white lines indicate the other alterations I plan to make.  I'll thin the cheekpiece and add a shadow line, outlined now in white, while changing its contour slightly as it nears the grip.
As for the grip, it's getting surgery on its bottom and top lines.  The surgery on the bottom line of the grip consists of cutting back its fullness.  The new line will come back almost as far as the present screw hole for the grip cap.  I'll also fit a much smaller grip cap, altering at the same time its angle so that a ruler laid on its flat will touch the heel of the butt.  This is hard to describe, so here's an illustration from David L. Wesbrook's useful Professional Stockmaking (1994):

Line D above shows this relation between the flat of the grip and the heel of the butt (English stockers often decrease that angle, making Line D touch the comb a bit forward of the heel).

I need to add one inch to the length of pull, so I'll add a new pad after I have finished with the comb.  As the distance from the rear of the bolt to the nose of the comb feels a bit cramped to me, I will also cut  back the nose of the comb by 1/4" or so.  Classically, the nose of the comb should be centered on the middle of the grip cap, as in Line E above, but I'll happily break that rule if I need more room for my right hand.
After beavering away, here are two photos of the work in progress.  I've reattached the grip cap so you can see how much I've cut away to open up the bottom line of the grip: 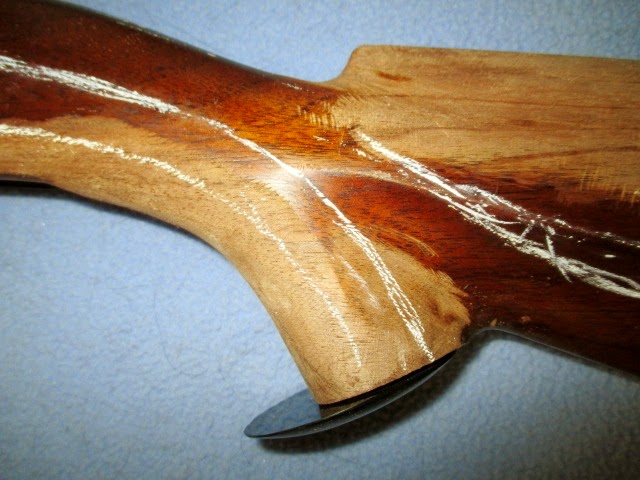 ﻿
﻿
﻿
I've also started to reduce the thickness of the cheekpiece.  The nose of the comb is now back 1/4", but it still doesn't give me enough room.  I'll cut it back farther, which should also align it with the center of the flat on the grip. The stock is well on its way to its new, classical appearance: 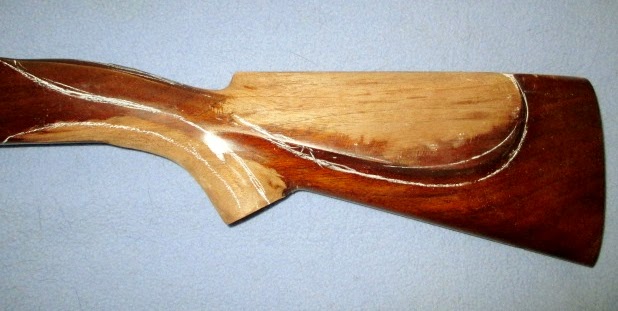 This sporter, like many Mausers, has a trough cut in the top of the grip from the bolt being retracted and chipping out the wood.  This trough can be eliminated and the upper grip line much improved by filing the wood and metal together at the top of the grip.  I'll show this in another post.
The final remodeling of the grip will consist of making it oval by slimming it down equally on both sides.  A little off here and a little off there will make an enormous difference:  stay tuned!﻿
Posted by Gerard H. Cox at 1:46 PM