I've made some progress since my last post.  I've swapped out the military two stage trigger for a Timney, which necessitated some inletting for the larger trigger mechanism.  I have added a Talley barrel band for a sling swivel.  I happily paid $15 to get it professionally blued (it was sent as part of a batch from a local gunsmith and was back in a week), so it's a much better match with the bluing on the barrel than a cold blued band would be. 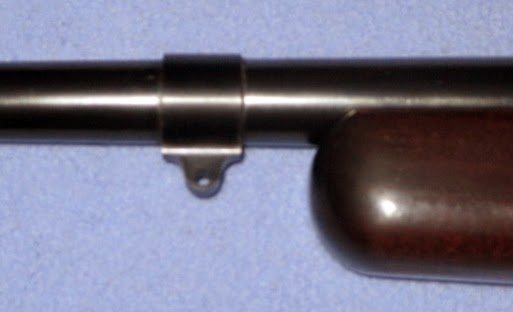 I've also substituted an "Extended Floorplate Release" for the military one.  It's available from Midway.  This is simple to do:  just drive out the pin visible below in the upper left corner.  There's a spring in there, so guard against its flying across the shop.  I had to file a bit to get the release to fit properly.  If you also cut a coil off the release spring, it makes it easier to release or replace the floorplate. 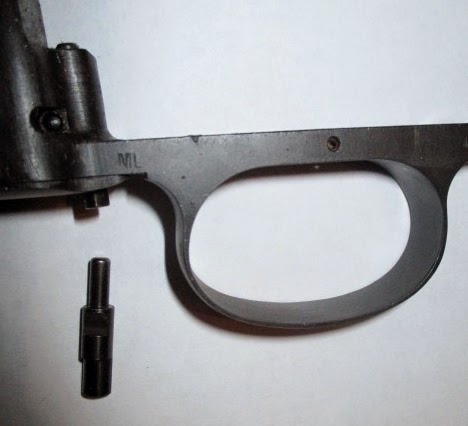 A new-in-the-box Lyman 18C front sight ramp came from E-bay ($10); it's a screw-on sight, but for a different size screw than the holes already tapped in the barrel, so I glued it to the barrel with Black Max (be advised, this sets up fast).  After doing some math, I ordered a front sight insert from Lyman.  A bit of filing with a triangular file on the insert (not on the ramp) resulted in a fine fit.  In a departure from tradition, I chose a fiber optic green bead.  Granted, the woods where I hunt whitetails are filled with hemlocks and white pine, but deer in late fall are a grayish brown, so the green should show up well.  More on that later.

Stockwork:  First came sanding and whiskering (wetting the wood with hot water to raise the grain, drying it, then sanding the whiskers off against the grain) through 320 grit.  I used sanding blocks whenever possible.  The difference between a first-class finishing job and a sloppy one lies in the sanding. Then came dyeing with a 2-2-1 mixture of dark walnut, red mahogany, and antique cherry dyes. (Let me emphasize the use of dyes, not stains which obscure the grain; they can be purchased at any decent woodworking supply house in powdered form, which you mix with water.  One source is Woodcraft.)  Try to be pleased when that first application of dye reveals blemishes you hadn't noticed.  After all, it's better to see them now rather than later.  Sand and whisker again, and then dye once more.  Repeat as necessary.

Given that the dye is water based, this may mean that you will have to do a final whiskering after dyeing the stock--I typically cut the whiskers off with the next finer grade of sandpaper, which in this case was 400 grit, going against the grain.  If you're going to checker the stock, make sure you've saved some of the dye to color the checkering.  I then applied two coats of  alkanet oil (if you want to make your own, see my post alkanet oil).  The alkanet oil should be applied sparingly, well rubbed in, and let dry for several days.  It's additive, so if you want it a bit darker, add another coat.  Make sure that no surplus remains on the surface of the stock.

Filling the Pores and Finishing:  When I can no longer smell the alkanet oil on the wood, the stock is ready for finishing.  I first applied two coats of marine spar varnish as a sealer (not that wood can ever be thoroughly sealed).  The first coat was thinned with mineral spirits.  Then I rubbed down lightly with 0000 steel wool.  Any hardware store will have some, but I prefer the extra fine oil-free steel wool sold by Lee Valley.  If the wood has really large pores, you may want to use a filler.  I've used Herter's French Red filler in the past, and it works.  Now, unless the pores are crater-like, I fill the pores by sanding in the finish.

I have tried a variety of finishes and have settled on TruOil.  As with any finish, apply thin coats. I applied two coats of TruOil and then sanded in the third.  Typically, I use 320 or 400 grit. I wet a small portion of the stock with TruOil and then rubbed the sandpaper gently with the grain until the finish was almost dry.  Then, on to the next area.   A day later, I rubbed down the stock with 0000 steel wool.  I got rid of the steel wool particles by burning them off over my kitchen's gas stove (I have, fortunately, an understanding wife).  The pores were shallower but still visible, so I built up two more coats of TruOil and sanded in the following coat.  That filled the pores.  Another rubdown with 0000 steel wool and another coat of TruOil resulted in a finish you could see your face in.

I personally don't care for that high gloss, so I rubbed down the finish.  Tradition calls for using pumice or rottenstone, but I've found that auto rubbing compound works well and is cheap and readily available.  Just follow the directions, and as ever, use a light touch.  (If that finish isn't shiny enough for your taste, rub it down with--ready for this?--auto polishing compound.)  Wipe it down carefully and let it sit overnight.

At this point, either I apply two thin coats of furniture wax and buff it by hand, or a coat of alkanet oil, well rubbed in with the palm of your hand.

The next post will deal with ways I've found to make checkering less error-prone.