My bride Caroline and I have just returned from a trip to New Mexico, terra incognita to the two of us.  The contrast between the weather conditions in Ithaca, NY, and the Santa Fe-Magdalena axis in NM could not have been greater.  A major snowstorm in the East canceled our flight out of Ithaca on USAir; we eventually flew out of Syracuse on American.  We arrived late in Albuquerque and fell exhausted into bed.

The next morning, I knew we weren't in Kansas anymore:  sun, blue sky (a relative rarity in cloudy Ithaca), with a high for the day forecast near 70 degrees.  We linked up with Libby and Steve, had our first New Mexican meal, drove to Magdalena and, after Libby's wonderful risotto, talked late, late into the night, or rather morning.

More wonderful talk the next day, plus a visit with Steve to an ancient site, with only a rock-filled depression remaining to indicate the presence of a kiva.  More talk that night, and Libby produced another memorable dinner, a braised leg of lamb.

Have I mentioned that we talked at length?  I did?  Probably the best indication I can give is that we talked so animatedly at such length that no one ever thought about taking pictures.  Only when we were on our way to Albuquerque did I realize I'd never even thought to take out my camera.  As a result, I have no pictures of Libby and Steve Bodio, only one a passer-by took later of Caroline and me in Piedras Marcadas Canyon: 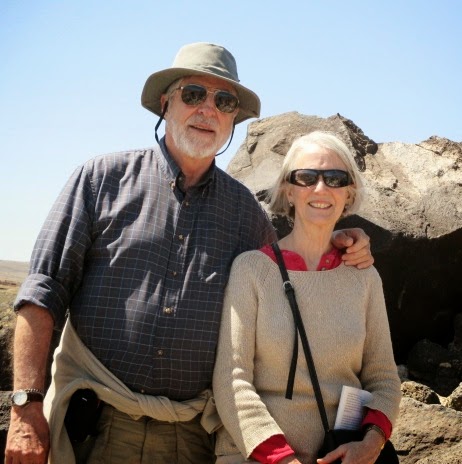 The weather continued to be wonderful the rest of the week.  We took a guided tour of the Plaza in Albuquerque and went to various museums.  Then north to Santa Fe and more museums, followed by hiking around Bandelier National Monument, seeing the ruins of cliff houses in Frijoles Canyon, and discovering petroglyphs at Tsankawi.

Here's Caroline at the entrance to one dwelling, accessible only by ladder: 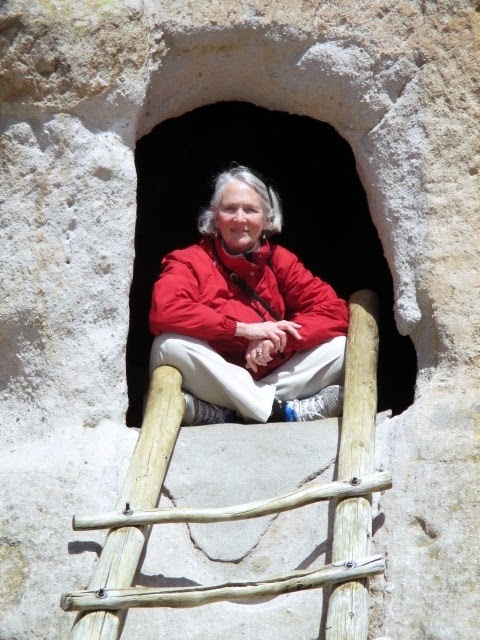 This kiva in Frijoles Canyon was quite well preserved, perhaps because a second layer of stone had at some point reinforced the outer wall (so the pamphlet said.  Later, after reading David Roberts's wonderful In Search of the Old Ones (Simon & Schuster, 1996), I wondered if that reinforcing layer had also served as a bench around the interior wall).  Its roof and the ladder down into it of course are no longer there. 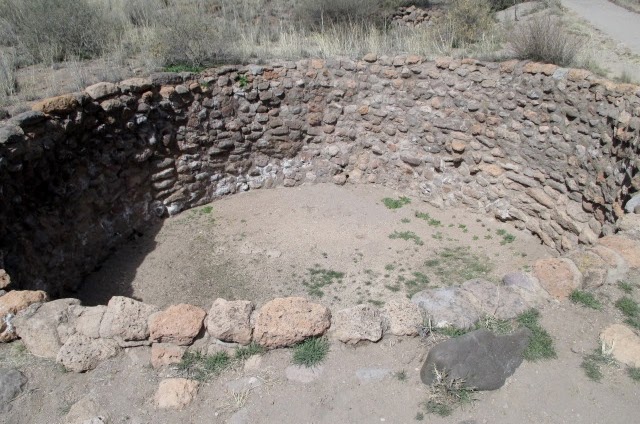 The stone at Tsankawi was tuff, a relatively soft volcanic rock, easy to build with but susceptible to wear.  As a result, once you descend the ladders down from the remains of the pueblo on top, the paths are worn deeply into the rock: 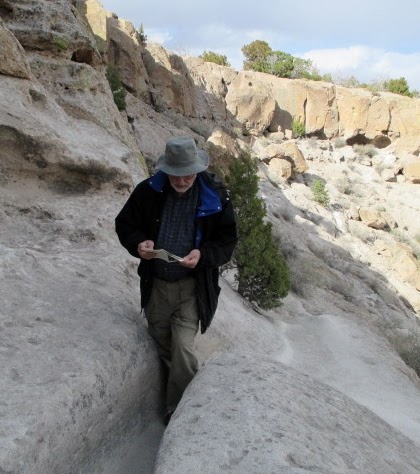 We ended our trip by exploring Petroglyph National Monument, west of Albuquerque.  Most, if not all, these petroglyphs are on boulders of volcanic basalt facing roughly south.  In the afternoon, of course, they were getting direct sunlight, so these pictures appear rather washed out.  The taloned bird with headgear on the right I find especially intriguing: 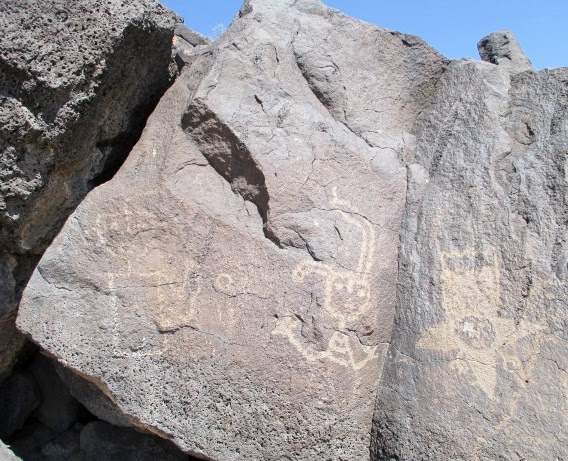 Given that my forthcoming book Blood on My Hands (Summer, 2014) deals with both real hands and their symbolic images, I was taken by these glyphs--and then, looking more closely, appalled by the boorishness of the person who used them for target practice: 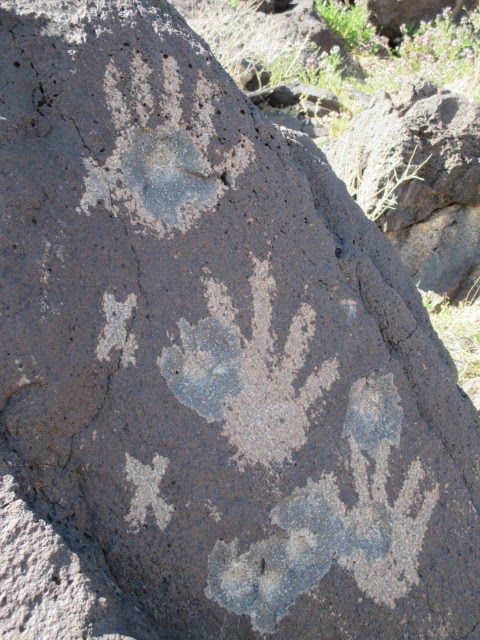 We learned a lot from this trip, cementing a friendship with Libby and Steve Bodio, seeing new country, learning about red and green chilies, and, not least, beginning to understand more about this land and the history of its peoples.  New Mexico's motto on its license plates rings truer than most:  it is indeed a land of enchantment.﻿
﻿
﻿
Posted by Gerard H. Cox at 10:22 AM

Email ThisBlogThis!Share to TwitterShare to FacebookShare to Pinterest
Labels: David Roberts, In Search of the Old Ones