In 1851, six years after he painted Fur Traders Descending the Missouri, Bingham painted The Trappers' Return, now in the Detroit Institute of Arts.  I hadn't known about this painting until my friend The Old Gunkie pointed it out to me.  Although he prefers it to the earlier painting, to me it's primarily interesting as a sentimental example of diminished complexity.

The composition is obviously taken from the earlier painting, but with significant omissions.  The snags are missing (the one at the downstream end of the woods may be a snag, or it may be a tree fallen from the forest).  The dead duck is gone, as are the hunting bag and rifle case.  The bear cub now has appropriately rounded ears but it is in a different position, standing upright rather than looking down its muzzle. The baggage between the bear cub and the boy has disappeared.

Nor are these changes all, for Bingham reworked what he did retain from the earlier painting.  The background of woods, cliffs, and shore is different.  The father is given a different facial expression, as is the boy.  Now, the two seem to be looking at the beholder, observers in their own turn of the audience standing where we are.

Still smoking a pipe, the fur trapper/trader now has a different cap and looks more benign, quite altered from Bingham's earlier painting and his even earlier sketch. 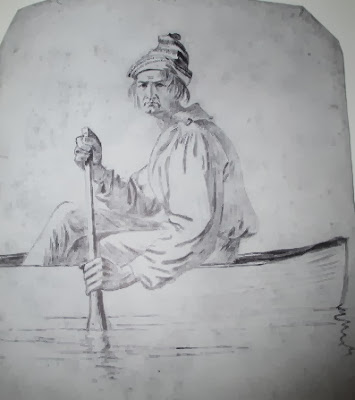 The boy is more changed from the earlier painting, but in a way that looks back to another of Bingham's earlier drawings.  The earlier drawing has no shooting bag or case for the rifle, as well as no duck.  If the painting of Fur Traders Descending the Missouri shows the son as bemused, this drawing, like The Trappers' Return, shows the son as slightly amused, focusing directly on the beholder. 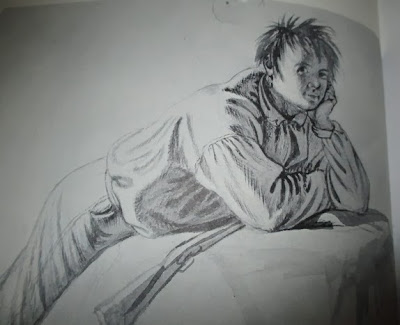 Trying to figure out why I don't care for this version nearly as much as the earlier one, I eventually decided that this one has a flattened quality to it.  Its diminished complexity makes it more like a calendar illustration than a painting.  There's interesting light, yes; there's an interesting composition, yes; but there's no life in it.  The ripples beyond the canoe seem unimportant, with the result that even while the painting represents movement, it seems static.  All is calm as we gaze at a nostalgic scene from earlier days.  In short, the past has become a version of pastoral, and their journey has become sentimental.  It's as if Bingham painted The Trappers' Return with one hand tied behind his back: