Making Over a SMLE Sporter, Part 2


At some point, probably in the 1950's or '60's when  surplus SMLE's were widely available and cheap (I can remember in the 60's seeing barrels of them in Warshall's Sporting Goods in downtown Seattle for about $35 apiece), someone purchased this SMLE made by BSA in 1916 and converted it into a sporter.  Although most owners of SMLE's simply cut the service stock down, this person took two unusual steps: first, he discarded the two piece military stock and handguard and fit the barreled action, magazine, and trigger guard into a Fajen two piece sporter stock.  That had the obligatory white spacers at butt and grip together with a Monte Carlo comb.  Second, he removed the bridge for charging the rifle, giving a cleaner top line to the rifle, but leaving a large crescent cutout on the left side of the receiver.
﻿ 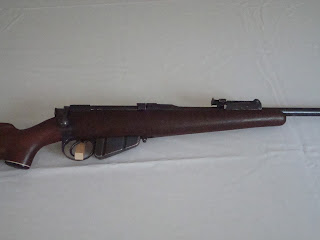 I bought the rifle sight unseen from the auction GunBroker.com in May 2009 for $115 (probably a bit under the '60's price of $35, correcting for inflation).  I thought that it was an excellent candidate for an inexpensive make-over into a British-styled light rifle. Here is an example of what I was thinking of, this one with a flush magazine.

My aging eyesight dictated that I'd have to mount a peep sight instead of the open express sights on the example above.

I cut off the Monte Carlo comb and used a rasp to reduce the cheek piece, reshaping it into the traditional pancake style with a sharply defined line.  Looking at several illustrations from old catalogs, I noticed that the English typically ended the forward edge of the cheek piece slightly to the rear of an imaginary line extended up from the rear of the grip, so I followed suit. 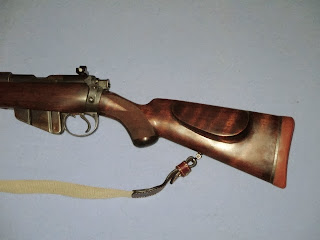 I also moved the nose of the comb back and reshaped the grip, slimming it and smoothing out its arc.  Not having any buffalo horn at hand, I capped the grip with ebony.

The pitch of the butt was, well, unusual, so I changed the angle of the butt to the comb line to 90 degrees.  I had on hand an old Winchester red pad, so I sanded off the brand name and mounted it.  It looked quite like a traditional Silvers pad.  I gave the butt some cast off, rasping away at the cheek piece until the sights were on target when I mounted the rifle quickly.

Altering the fore end was comparatively straightforward.  I attached an ebony tip with dowels and epoxy and then shaped it into the shallow curve typical of English sporting rifles.  I slimmed the sides of the fore end considerably.  I cut off the two hollow studs in front of the magazine, originally intended to secure the detachable canvas breech cover, filed the metal smooth, and cold blued it. 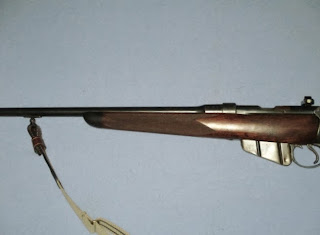 I then took the gun to Fred Cornell (570 888-9236) of Sayre, PA, who was able to machine a fill-in for the charging bridge cavity and then soldered it in place and cold blued it.  He removed the rear sight, filing down the screw that secured it to the barrel until it was flush.

Fred soldered on a Williams ramp front sight and drilled, tapped, and mounted a Williams FP aperture sight.  The one negative of this sight is that unlike a Lyman, the sight bar can't be easily withdrawn.  If I were to do this over again, I'd search out an older Lyman with its quick release.

I wanted to mount the old-fashioned rings for a sling, but I couldn't find a source for them.  Instead, I ordered swivels and a sling from NECG, and Fred soldered on the front swivel in a typical English position.  Similarly, I placed the rear swivel closer to the grip than we're accustomed to.

Refinishing the rifle was straightforward.  The Fajen stock was black walnut with a somewhat greenish cast, so to kill the green I added red mahogany aniline dye to extra dark walnut dye in 50-50 proportions.  I then rubbed in two coats of alkanet oil, rubbing each down with 0000 steel wool after it had dried.  Two coats of satin polyurethane varnish followed as a sealer, again rubbing each coat down with steel wool.  I then top coated with Tru-Oil with a slight amount of alkanet oil added to it.

For checkering, I used a simple V pattern of 18 lines per inch on the grip and the fore end. The checkering on the fore end wraps around.

At some point, I'd like to have the magazine shortened so it only holds five rounds.  It would still protrude, but not look quite so military.  As of now, the rifle with sling weighs seven and a half pounds, handles like a dream, and is a delight to hunt with.