Why the Puritan John Winthrop Gave Up Hunting 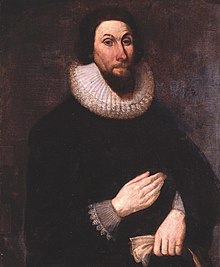 John Winthrop (1587/88-1649), who was to become the first Governor of the Massachusetts Bay Company in 1629, belonged to the socio-economic class in England that could count hunting among its privileges.  Nevertheless, he gave it up.  In 1611, when he was  twenty-three,  Winthrop carefully enumerated his reasons:

"Finding by much examination that ordinary shooting in a gun, etc:  could not stand with a good conscience with myself, as first, for that it is simply prohibited by the law of the land, upon this ground amongst others, that it spoils more of the creatures than it gets:  2 it procures offence unto many:  3 it wastes great store of time:  4 it toils a man's body overmuch:  5 it endangers a man's life, etc.:  6 it brings no profit all things considered:  7 it hazards more of a man's estate by the penalty of it, than a man would willingly part with:  8 it brings a man of worth and godliness into some contempt:  --lastly for mine own part I have been crossed in using it, for when I have gone about it not without some wounds of conscience, and have taken much pains and hazarded my health, I have gotten very little but most commonly nothing at all towards my cost and labour."

Many today would probably agree with reasons 1-8, but to my ear the final reason is the most telling. It's the only reason that is personal rather than impersonal.  Here, and here alone, I'd suggest, for just a moment we can hear the human voice of John Winthrop, a hunter who has returned home too many times empty-handed.  Despite enduring "some wounds of conscience," despite undergoing many pains and exhausting himself, he typically was unsuccessful.  That lack of success--his being crossed, thwarted in his pursuit of game, and almost certainly missing what he shot at--appears to be what motivated his inventory.  Reasons 1-8, then, serve less as reasons to change his behavior than as rationalizations.

What's fascinating to me is that even after enumerating no less than eight of these arguments, his own frustration explodes at the end, overriding everything he has listed before.  By the time he had his portrait painted, however, his projected self, his public persona, if you will, is much more contained.   He appears to be completely in control.  When a portrait was commissioned in that period, hands were an added expense. Winthrop is quietly showing that he could afford to have both hands painted, and his affluence is further displayed by the lace that edges both his ruff and his cuffs.  This is not a portrait composed to engage its audience.  His hands are not making a gesture outwards:  the upper hand, indeed, is turned inward, held close to his chest.  His youthful frustrations are long gone--and to that degree, he appears less human and much more the austere representative of Puritan authority.