For those of us fortunate enough to live where sweet corn is grown, corn on the cob is one of the delights of summer.  But what is the best way to cook it?  The method I use has changed over the years.  I started out by bringing a large pot of water to the boil, adding the shucked corn, bringing it back to the boil, putting on the lid and turning off the heat.  Ten minutes later, it was ready to eat.  Slathered with butter and salt, it was delicious.


Friends of mine simply microwaved the corn:  two minutes for one ear; five minutes for two ears.  This method produces corn that is excellent, but somehow I don't find it as satisfying as the next method, grilling.


Grilling corn on the cob has the great advantage over boiling of not heating up the kitchen by bringing a large pot of water to 212 degrees and over microwaving of adding more flavor, but the process I followed was time-consuming.  First you pulled back the husks, removed the corn silk, replaced the husks, and then soaked it for twenty minutes or so.  I grilled the ears on low heat for about seven minutes, turned each ear 180 degrees, and grilled for another seven minutes.  The grilling added some flavor, and I no longer cared about adding butter.  The only drawback was that husking the grilled ears left flakes of charred husk scattered around.


Recently, I read somewhere--I am sorry I can't give credit either to the writer or to the magazine--about a variation on this grilling method.  The article said that it wasn't necessary to remove the corn silk or to soak in water.  I was skeptical about putting the ear directly on the grill, but I tried it.  This method does in fact work, and work well:  the outer leaves get charred, but the corn is delicious.  I should note that it cooks faster this way, so check it after five minutes or so to see if it's ready to turn over.


The article also claimed that it isn't necessary to shuck the ear.  Instead, after grilling, use a sharp knife to cut through the ear approximately at the bottom row or so of kernels (which of course are covered up by the husks).  Working from the sheared end, the article claimed, it's much easier to remove the husks and corn silk.  That also turns out to be correct.  There are no charred remnants that the breeze invariably blows into other food.


Caroline eats it as is with no seasoning; I add only some ground pepper.   Either way, corn grilled this way is simple perfection.

Email ThisBlogThis!Share to TwitterShare to FacebookShare to Pinterest
Labels: grilling corn on the cob

Having successfully browned the Damascus barrels of this 1887 Scott hammer gun (see my previous post), it's now time to restore its stock.  To say this, however, is immediately to raise the question of what "restore" means.  These days, it is often understood to mean "make like new again."  In the antique furniture trade in the 1920's and '30's, all traces of age were removed to make the piece look brand new.  This process was known in the antiques trade as "skinning," and its widespread practice eventually made pieces that still retained their original finish much scarcer and therefore more valuable.  To me, over-restoration is as wrong-headed as a lovely woman in her later years resorting to Botox to replicate her youthful appearance.  As John Donne declared almost three hundred years ago, "Neither Spring nor Summer Beauty hath such grace / As I have seen in one Autumnal face."  The aim of restoration should not be to make an old gun look new again, but to bring back the grace of its autumnal beauty.


This particular hammer gun has decent walnut and some engraving, but it left its Birmingham factory in 1887 as one of the "plain" guns offered by W. & C. Scott and Sun (the Scott 1872 catalog shows a similar model but with the earlier, higher hammers).  In contrast to today, engraving was relatively inexpensive in the 1880's.  It probably never was stored in a trunk case, which would have protected its finish, and it was used hard.  Compared to the interior wood of the fore end that's protected by the barrels, the color of the wood has faded, much as if it had been bleached by the sun.  Its original checkering survives only in a few place, having been replaced by much coarser lines outlined by deep grooves.  The border grooves remain, but the gun has been used so hard that even the second set of checkered lines is worn away.


In these circumstances, what sort of restoration is possible?   I am going to remove what remains of an earlier refinishing.   (How do I know it's not original?  No original finish would show brush marks!)  I'll do as little as possible to make it look well cared for:  gently remove the sloppy finish with stripper and steel wool (which, unlike sandpaper, doesn't destroy the patina), apply some coats of alkanet oil, then a sealer coat of spar varnish, and follow that with some coats of TruOil.  Finally, I'll dull the finish slightly and top coat with alkanet oil, slowly replicating a London (or, for this gun, a Birmingham) oil finish.


What to do about restoring the checkering is a problem.  Removing the second checkering's grooved borders would remove far too much wood in the wrist--and that is already perilously slim.  It is thus impractical to attempt to get back to its original look.  Is some checkering better than none, even if it is from a later, crude refurbishing?  Or is it better to leave the wood alone and have its "checkered history" (forgive me) evident?  Food for thought.

Ideally, I first would separate metal action and trigger guard and plate from the wooden stock before working on the wood, but someone earlier buggered up the action screw so badly that I can't budge it and don't want to take the risk of making things worse.  I'm just going to have to be very, very careful finishing the wood around the fences.


Here's a shot of the butt and the horn-tipped fore end after stripping off the old finish: 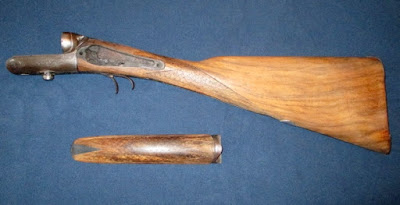 I managed to raise one dent and lessen the depth of another by applying a steam iron to a damp rag held against the wood.

It then was time to rub in alkanet oil.  Three coats later, with several days between each coat, the wood has regained some color and its figure is more pronounced:

Next came a coat of spar varnish, rubbed down with 0000 steel wool.  The satin spar varnish was followed by sanding in TruOil:  I applied two coats of TruOil and then a third sanded in with 400 grit paper moistened with more TruOil.  After the sanded-in coat dried, I rubbed that down with 0000 steel wool, burned off the steel wool particles over a gas range, and then applied two more coats of TruOil, sanding in the third.  I did this a total of three times.  I then applied a coat of TruOil and rubbed it down with auto rubbing compound.  Another coat of alkanet oil followed, again rubbed down with the auto rubbing compound.

The old saying about applying an oil finish goes, Rub in linseed oil once a day for a week, once a week for a month, once a month for year, and once a year forever.  The spar varnish and TruOil have accelerated this process, so I'll just rub in alkanet oil once a month for a year.  The stock now has partially but not completely filled pores.  The wood no longer looks ravaged, but relatively well cared for. 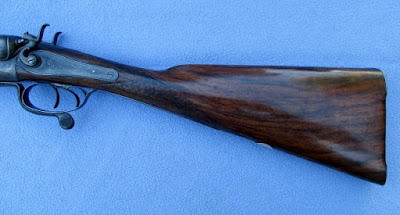 This Scott shotgun has had a hard life, but with its barrels browned (and then rubbed back) and with its wood refinished, it looks now as if it has aged with some degree of grace: