Reshaping the Stock on a Marlin Golden 39 A

A few years ago, I purchased a used Marlin 39 A .22 with the idea that it would provide an understudy to my Marlin lever actions in .45-70 and (my favorite) .38-55.  Carbines have their good points, but these two lever guns were rifles, so I wanted the relatively long 24" barrel of the 39 A.  (If you want a carbine, look for the Marlin 39 M, the Mountie model, and be prepared to pay more for it.)

I didn't think to take a photo of my rifle when I acquired it, but (except for the scope) it looked almost exactly like the one illustrated here in an earlier Marlin advertisement: 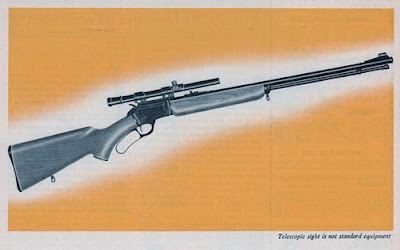 Following the Marlin 39, introduced in 1921, the 39 A was introduced in 1939.  My Golden model with its gold trigger was manufactured in 1971 (and thus is now a so-called early model, the newer model dating from 1983).  Typically for its time, it had a butt stock and fore end that to my eye called out for reshaping.  The fore end was an exaggerated beavertail; the butt stock had an exaggeratedly long pistol grip.  The curve from the wrist to the nose was slack, and the fluting at the nose of the comb was clunky. Both fore end and butt bulged outwards from the slim receiver, giving the rifle an oddly wasp-waisted look when viewed from above or below.  A minor point was that I didn't like the Marlin icon of a bull's-eye in white and black plastic near the butt's sling swivel.  It could be argued the bull's eye complements the white spacers at the grip cap and buttplate, but they were going to go.  So, too, was the bull's eye.  In addition, I needed a longer length of pull.

The fore end was a reasonably quick fix.  The earlier Marlin 39's had considerably slimmer fore ends, so I removed the fore end and simply planed down its width and depth until they corresponded to the dimensions of the receiver and the fore end cap.

As for the butt, getting rid of the white spacer and then adding a red rubber recoil pad gave me the length of pull I wanted.  A pad of course is not needed to reduce recoil on a .22 rimfire, but the friction from the rubber pad can keep the rifle from falling down when it's stood upright on a smooth surface.

Slimming down the butt stock was more of a challenge.  I reduced the width of the comb until my eye was looking down the barrel when the rifle came up to my right shoulder (I also followed the same procedure for my left shoulder).  I then tapered the sides of the comb to eliminate the fluting at the nose.  Filling the cavity where the bull's eye had been with a matching piece of wood was straightforward.  I cut back and slimmed down the pistol grip until its diameter felt comfortable and substituted for the rounded black plastic grip cap a flat piece of ebony, attaching it with black epoxy.  Rubber bands made clamping easy:

Sanding and whiskering  were straightforward.  Next came dying the stock to give it more color.  I used a blend of aniline dyes (3 parts Dark Walnut, 1 part Red Mahogany, and 1/2 part Antique Cherry) because they don't have pigment to obscure the grain.  I then added a coat of home-made walnut brew.  Here's the result:

The last steps were adding a coat of alkanet oil.  I let that dry for three days, then steel-wooled the stock to make sure no oil remained on the surface.  After burning off the tiny particles of steel wool, I started applying very thin coats of Tru-Oil, sanding them in until the pores were filled, and rubbing down the last coat of Tru-Oil with auto rubbing compound.

Checkering came next.  The black walnut was rather coarse, so I used 18 LPI, adding a narrow border.  The checkering wraps around the fore end.  The checkering pattern for pistol grip came from the illustrations of the Marlin Fire Arms catalog from June 1897 (available very reasonably from Cornell Publications) and from William S. Brophy's photographs in Marlin Firearms: A History (Stackpole, 1989).  Here is a shot of the checkering in the white, rather a contrast to the butt with its richer colors from the dye, alkanet oil, and coats of Tru-oil: 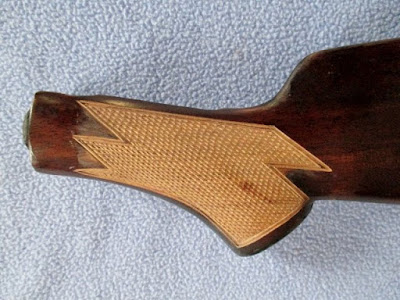 After completing the checkering, I carefully scraped inadvertent over-runs and then sanded the divots smooth with 400 grit paper.  I dyed the panels as before with my aniline blend and my walnut brew, rubbed in a coat of alkanet oil, and then brushed on a finishing coat of satin spar varnish diluted 50-50 with mineral spirits.  Touching up with Tru-Oil completed the job.
﻿
My friend Mike Bennett drilled and tapped its tang for a Marble's tang sight.  This is a tricky job, because it's illegal to deface any part of the serial number on the tang.  He used a shotgun bead drill fixture and a tap guide from Brownell's to line everything up and keep the drill and tap straight.

This is a shot of the receiver, checkered grip, and tang sight: 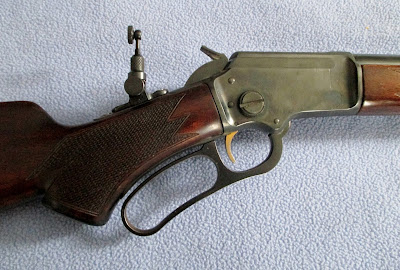 This 39 A is now considerably trimmer.  Here, again, is where I started:
﻿

﻿
﻿
And here's the outcome:  a sleeker stock with a shortened pistol grip, a slimmer fore end, and checkering.  The Marble's tang sight now complements its resemblance to earlier Marlin 39's.
﻿

﻿
Word has it that the quality Marlin Firearms has long been known for is becoming a thing of the past. If you've ever thought of owning a 39 A, now might be the time to buy a used one.  Older ones are still reasonably priced, but they're getting more expensive.  If current build quality continues to deteriorate, prices for the older model could jump dramatically.﻿
Posted by Gerard H. Cox at 2:57 PM