Homemade Bread To Die For, Part 5: Tools for Measuring, Mixing, and Baking, Plus A Few Suggestions for Further Reading

As in most handmade things, tools for making bread count for less than skilled hands and experience.  I have been baking nearly every week for over two years now, and I'm still learning--and I look forward to continuing to learn for the rest of my life.  What follows is less what you should have to bake bread than what has worked for me.  I've used the headings of Measuring, Mixing, Baking, and (which could just as easily come first), Further Reading.

[Since this writing, I've come to use my scales for refreshing the starter:  I still dump half of the existing starter, but then I add the same weight (not volume) of flour and filtered water.  The starter is still like pancake batter, but batter for a thicker pancake.]

A Danish mixing tool I like better than a spoon is widely available.  I bought mine for $8 from a supplier that's given me good service, Breadtopia: 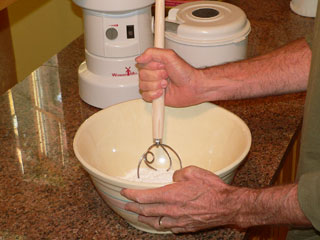 
A plastic dough container and lid is also useful.  A six quart one is $ 9.50 from Breadtopia: 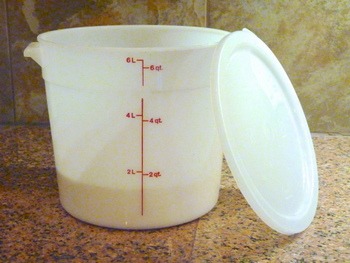 Given that the Lahey method uses a covered receptacle to create an oven within an oven, you need a  pot to bake in.  One choice is cast iron.  It's indestructible, but it's heavy.  Chad Robertson likes the Lodge combo cooker.  It does have the advantage that if you use the shallower half as the bottom, you don't have to worry about burning your hand on the sides when you slash the dough.  The diameter is 10 1/4 inches.  My combo weighs close to 12 1/2 pounds.  $58.00

Instead of cast iron, another possibility is to use a clay pot.  Not indestructible, but lighter, and available in either a round or an oblong form.  I am currently using the La Cloche oblong clay baker, $47 at Breadtopia. 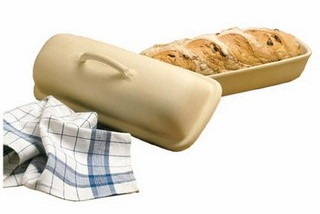 Obviously, I've benefitted enormously from Jim Lahey's My Bread (W. W. Norton, 2009) and from Chad Robertson's Tartine Bread (Chronicle Books, 2010).  Although I'm not as focused as the legendary French grandmother who devoted her entire life to producing the perfect poulet roti, I am primarily concerned with trying to perfect loaves of white, whole wheat, and rye breads.  You may be more interested yourself in various kinds of bread, such as walnut, or olive, or cheese breads.  Both Lahey and Robertson offer a wide selection of suggested recipes, as does Emmanuel Hadjiandreou in How to Make Bread (Ryland Peters & Small, 2011).  Lists of bread books (and their reviews) are available at Breadtopia and at Amazon.

I began to get interested in bread after reading Rudolph Chelminski's Smithsonian article, "Any Way You Slice It, A Poilâne Loaf Is Real French Bread" (Jan., 1995).  Some books I've especially liked on the topic of bread and baking include  Elizabeth David's English Bread and Yeast Cookery (American ed.: Biscuit Books, 1994), Sara Mansfield Taber's engaging account of her experiences in France, Bread of Three Rivers (Beacon Press, 2001), and Burton Anderson's chapter on Tuscan bread in Treasures of the Italian Table (William Morrow, 1994).  Jeffrey Steingarten humorously captures the near-frenzied intensity of making pain au levain in his chapter, "Primal Bread," in The Man Who Ate Everything (Knopf, 1998).

P.P.S (2/17/2016):  The Larousse Book of Bread (Phaidon, 2015) by Éric Kayser (a major figure in the revival of artisanal bread in France) not only covers a wide variety of breads but has wonderfully clear directions and a wealth of illustrative photographs.