Epoxy bedding is straightforward enough, but the devil lies in the details. There are a number of explanations about how to do this: three I especially like are "Simple Stock Bedding" by John Barsness in his Obsessions of a Rifle Loony (Deep Creek Press, 2010), a book every firearms enthusiast should own, Patrick Sweeney's "Glass Bedding" in  his excellent Gunsmithing Rifles (Krause Publications, 1999), and "The Experience of Glass Bedding a Rifle Stock" by Bryce Towsley in his  Gunsmithing Made Easy (Stoeger Publishing, 2006), which has detailed photographs.

The key point to remember is that if you don't apply release agent to every part that needs it, you can glue the stock to the barreled action. Some people like to use floor or furniture wax as a release agent.  I prefer some combination of three release agents: Brownell's Acra-Release Aerosol; modeling clay to fill screw holes and crevices where you don't want epoxy; and Pasco PVC 10 mil Pipe Wrap for masking off the barrel.

I use Brownell's Acraglas Gel rather than Acraglas, as it pretty much stays put where you apply it.

Some other suggestions:  Score or crosshatch the wood with a sharp knife or chisel so the epoxy adheres.

To facilitate getting the barreled action out of the stock, you don't want epoxy in front of the recoil lug, so put release agent on the front of the lug.

If you need to fill gaps along the receiver or the barrel in the fore end, put masking tape along the top of the stock so you can peel it off after it cures.

Tighten the screws only moderately:  I tighten them and then back them off half a turn.

Check the epoxy after five hours.  After five hours, the epoxy has set up enough to be semi-solid, but it's yielding enough to be pulled apart if you've made a mistake.  If some has gone where it shouldn't, you can still cut it easily with a knife or chisel and remove it.  Then screw it back together, back off the screws a half turn, and let it set.

To remove the barreled action from the stock, turn the rifle upside down and tap the heel of the butt on a surface that won't harm the stock.  You should then be able to remove the barreled action.  Repeat, more firmly, as necessary.  If it  still won't budge, back out the screws until they are just engaged and hit them with a mallet.  If that doesn't work, call Brownell's (641 623-5401).

You may discover some voids in the bedding.  Here, for example, is the BRNO after the first bedding: 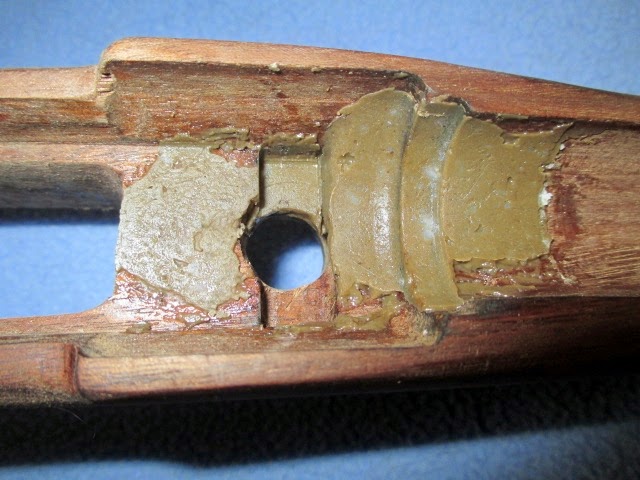 Some gaps in the bedding are obvious.  Not to worry:  just mix up some more epoxy and fill in the gaps.  Wipe down the metal and reapply release agent, etc.

Here's how it looked after another application: 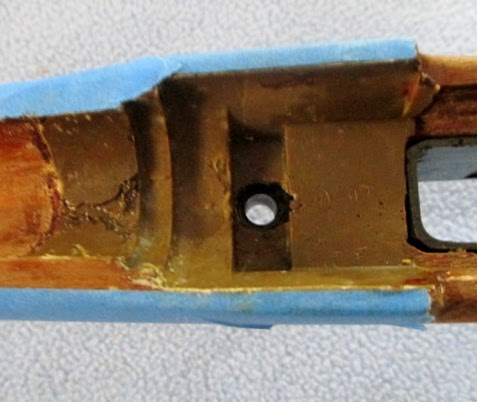 A tiny bit has to be added to smooth out the bedding for the barrel, but it's functionally complete.
﻿The next in this series will cover finishing the stock.