Now comes the patient, painstaking part:  the drama of cutting off big chunks of wood is over.  At this point, it helps to make a check list for the sequence you need to follow.  For example, I am going to add a barrel band for a sling swivel, so I don't want to attach the front sight before I do that.  (You ask, why do I mention something so obvious?  Never mind!)

To make matters even less dramatic, much of the work that needs to be done will not be visible, as in floating the barrel or supporting the recoil lug with epoxy.  I can promise, however, that following all these steps does eventually result in a real sense of satisfaction and, sometimes, a year or so later, a sense of wonder:  "I did that?  It looks pretty good!"

For now, let's begin with the two tasks I mentioned in my last post:  filing down the tang of the receiver and rounding the squared-off fore end.  Each one affects how the rifle will look.  Here's a picture of the Mauser tang in a military stock: 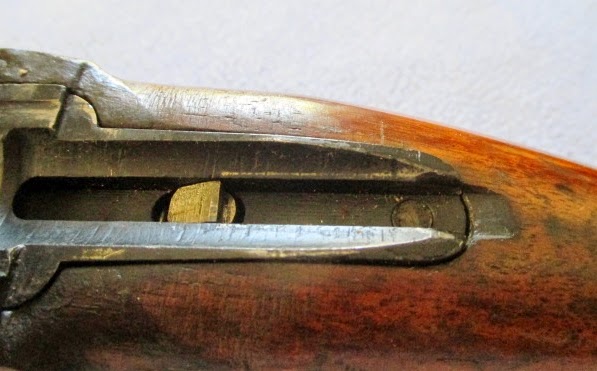 Notice the wood chipped out behind the tang?  That's why you don't want to copy this configuration  in a Mauser sporter:  working the bolt will chip out some wood.  The solution is simple:  just file metal and wood together until the rear of the channel barely protrudes above the tang and stock.  Here's how the BRNO came out (later, I'll cold blue the tang): 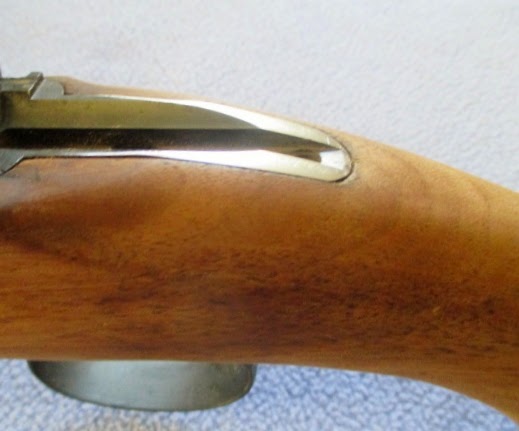 Not only will you not have a problem with wood chipping out, but you will gain a better line for the top of the pistol grip.  Now its slope looks less like a ski jump:  the top line is more gradual and more graceful:
﻿ 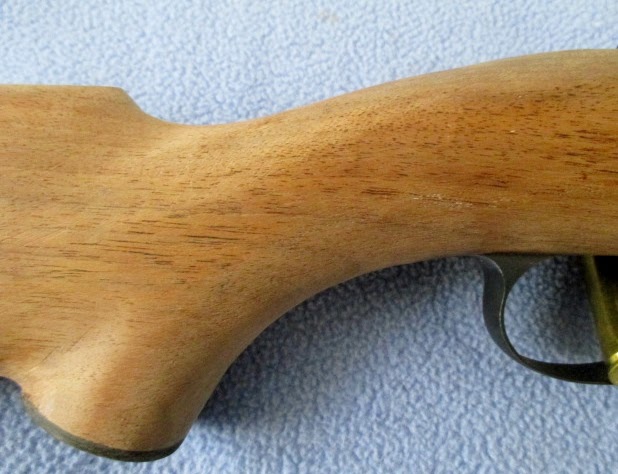 ﻿
You have two choices in regard to the squared-off fore end.  One is to add an ebony tip; the other is simply to round it off.  I like ebony tips, but this barrel is only 21 1/2" long, so space is tight. To have the fore end in proportion to the length of the barrel, I need to have a barrel band for the sling swivel.  That in itself doesn't preclude an ebony tip, but I have long arms (a 35" sleeve), so my forward hand will have to be very close to the end of the stock.  Given that I want some checkering where my hand goes, there simply isn't room for a fore end tip.

So, no fore end tip.  That's OK:  As the great stock maker Alvin Linden commented, fore end tips don't do anything!  For a classic look, the tip of the fore end should be rounded.  Here, it helps to have the depth of the fore end pretty close to its width.  One method of making it round is shown on Midway's video.  I just eyeball it and take my time.  If it seems off, just measure the depth (or width), divide that in two for a radius, and then scribe half a circle on a piece of paper, cut it out, and hold it against the wood.  It will be immediately obvious where it's off.  Restrain yourself from making it perfect, for fine sanding will come later, and that can easily distort curves and, especially, complex curves. 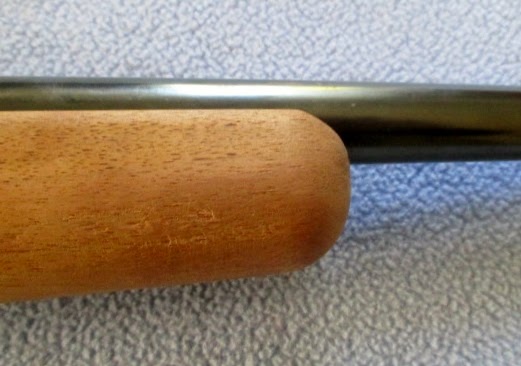 In the next post, I'll talk about epoxy bedding the action.  Whoever inlet this rifle did an excellent job, apparently using a very small gouge.  But the epoxy, carefully applied, will produce an even better job where it counts most, around the recoil lug.