When I wasn't staggering through the taiga or the tundra in our recent trip to Alaska, I found myself happily contemplating how this remodeled BRNO sporter in 7x57mm should look.  I wasn't sure that removing the last vestige of the Monte Carlo comb was going to leave me with enough comb height to use a scope, so I decided to make a defect a virtue and set up the rifle with a Lyman peep sight (it was already drilled and tapped for one).  I'd have to shop for another ramped front sight, one long enough to use or to hide the existing two blind screws.

I ordered a 1" red pad from Galazan, knowing from experience that it was easy to sand to fit.  I forgot, though, that it comes without screws (why, I don't know), but I managed to turn up two that would work.  Attaching the pad was relatively straightforward.  As the outer surface of the pad was not cut for the screws, I inserted them from the rear and pressed the pad with the inverted screws down on my bench.  With a sharp knife, I made two small slits where the points stressed the material.  Some Vaseline on the screws, and they entered the pad fairly easily.  I used the original hole for the top screw, but the lower one did not line up (it almost never does).  Not a problem:  I glued in my favorite tapered dowel, a chopstick, and then cut it flush when the glue had dried.  Then, after carefully positioning the pad on the stock, engaging the top screw, and inserting the bottom screw in its place, I tapped it to mark its position.  For this kind of drilling, I much prefer an eggbeater hand drill:  it's a bit slower, so I have more time to correct before something goes really wrong.

I worked down the pad to fit by using a hacksaw to saw off excess, then, carefully, a belt sander, and finished up with sandpaper on a block.  For reasons I'm not clear about, 220 grade cuts the pad more cleanly than 100 grade.

Once the pad was in place, I could adjust the angle of the grip cap.  I didn't need any more length for the pistol grip, so I set the bottom angle so that extending that line would hit the top of the recoil pad, as in the illustration I used in Part 2:

﻿
The band saw made the first cut, which I cleaned up with a chisel and block plane.  Creating the open grip I wanted had resulted in a rather small grip area, so I decided to make my own grip cap out of a scrap of ebony.  Mixing up black Acraglas, I epoxied it on.  Here it is before I began shaping: 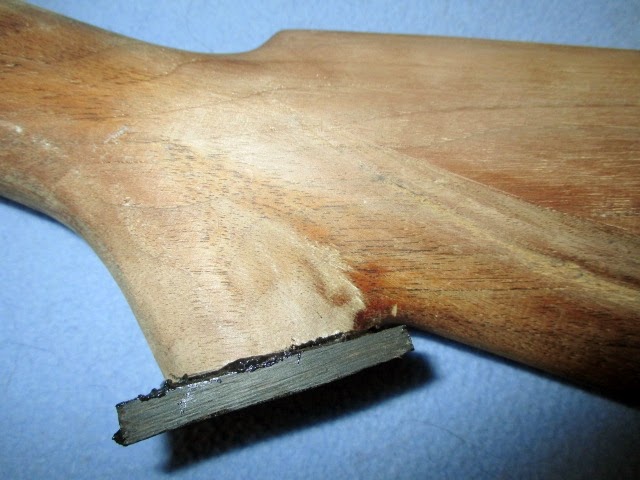 Here's the shaped and rough-sanded ebony cap; I'll thin it a bit later: 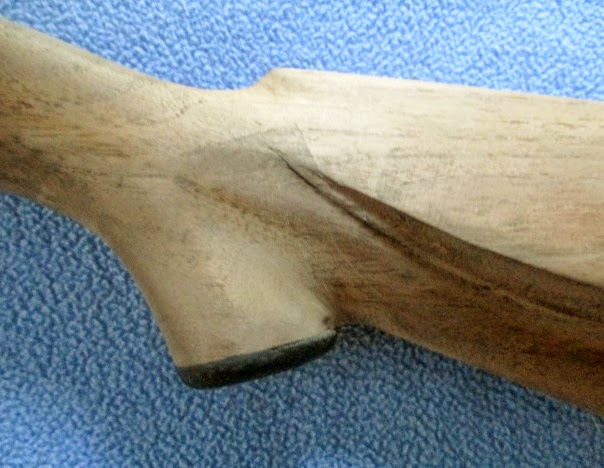 Two other operations had to take place:  first, cutting the fore end to length; second, filling in the gap in front of the bottom metal, caused by substituting a FN commercial one I had on hand for the military one.  I like a miter box for cutting the fore end at ninety degrees, and I use tape on the underside to keep splintering to a minimum.

Here's a photo showing the differences in length between the military and commercial versions of the bottom metal.  Using the shorter one without guard screws of course leaves a gap in the inletting, so I patched it with a piece of the cut-off fore end.  The patch itself is completely obscured, what with the rubber band putting pressure on the patch in one dimension and the bar clamp putting pressure on it in another dimension; the other end of the bar clamp is on the now flat surface of the fore end. 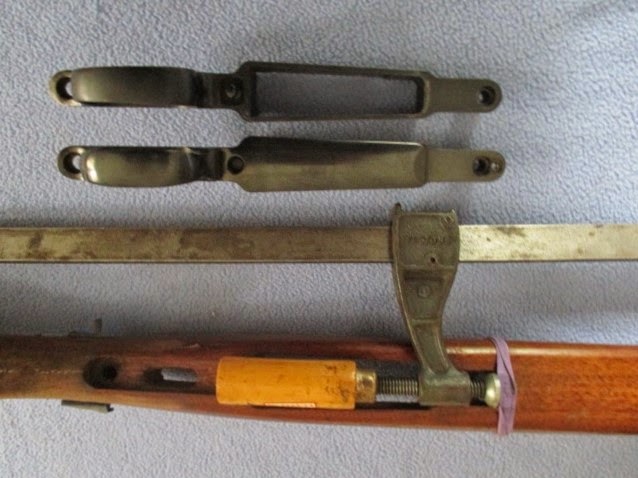 Here's the patch cut flush after inletting the commercial bottom metal; the brown line of epoxy will be less visible after dying the wood which is, after all, from the same blank and thus matches as well as possible:
﻿ 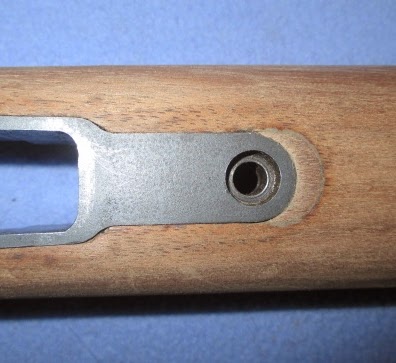 The next post will deal with several bits of metal work:  slimming down the top tang of the action for a better top line of the grip, and rounding the fore end tip.
Afterword (10/12/2014):  Although I wasn't sure that removing the Monte Carlo comb was going to leave a comb high enough to use a scope, it has turned out to be fine for a scope mounted low.  As my immediate use for this rifle will be for whitetails in heavy cover, I'm going to proceed by using a peep sight together with a ramped Lyman front sight (the latter just purchased inexpensively from e-Bay.)﻿
﻿
﻿
Posted by Gerard H. Cox at 3:12 PM