A reader has asked me to say something about Belgian proof marks.  I've owned two Belgian side by sides and two Browning Superposed, so I guess I can say that I have some acquaintance with twentieth century ones, but unlike my posts on antique English shotguns I don't have an antique Belgian one at hand to describe.  I'll restrict myself therefore to saying something about gun making in Belgium and offering some proof marks.  To my knowledge, there isn't a book out that covers European proof marks:  If someone knows about such a book, please add a comment with that information.  [Later note:  Gerhard Wirnsberger has written The Standard Directory of Proof Marks, translated byR. A. Steindler; it is available from Blacksmith Publishers Corporation.]

Because of its deposits of coal and iron ore, industrialization took place early in Belgium.  That, plus its skilled work force and their comparatively low wages, quickly made Liège a center for gun making.  Belgian firms could produce whatever was wanted at whatever price point, and the wage structure made their prices lower than their competitors.  As you might imagine, many, many Belgian guns were exported to other countries for resale.

What I first look for are the marks indicating country of origin.  The US never had a proof house, of course, so you have to rely on maker's names--which may well be deceptive versions of famous makers  (Purdie for Purdey, for example)--and addresses (sometimes deceptive, as well).  But if the gun is a British or Continental breechloader, it should have proof marks on the water table of the receiver and on the barrel flats near the breech.

Here's an illustration of early twentieth century Belgian proofs from W. W. Greener's The Gun and Its Development, 9th edition (1910):

﻿
﻿The first on the left and the fourth (the one that resembles a candlestick) indicate provisional proof.  The second and third indicate it was proofed at Liège.  The one on the far right is the definite proof for nitro, or smokeless powder.

Lee Kennett did a fine survey, "A History of Proof Marks:  Gun Proof in Belgium," that was published in The Gun Digest (1978).  I've reproduced Kennett's numbers in the complete list at the end of this post:
﻿

Other important marks give information about the barrels:

Choke is so indicated in English (why, I don't know), and it can be an indication of date:

Here is Lee Kennett's complete listing of Belgian proof marks in his "A History of Proof Marks:  Gun Proof in Belgium," published in the 32nd edition of The Gun Digest (1978), 129-138. 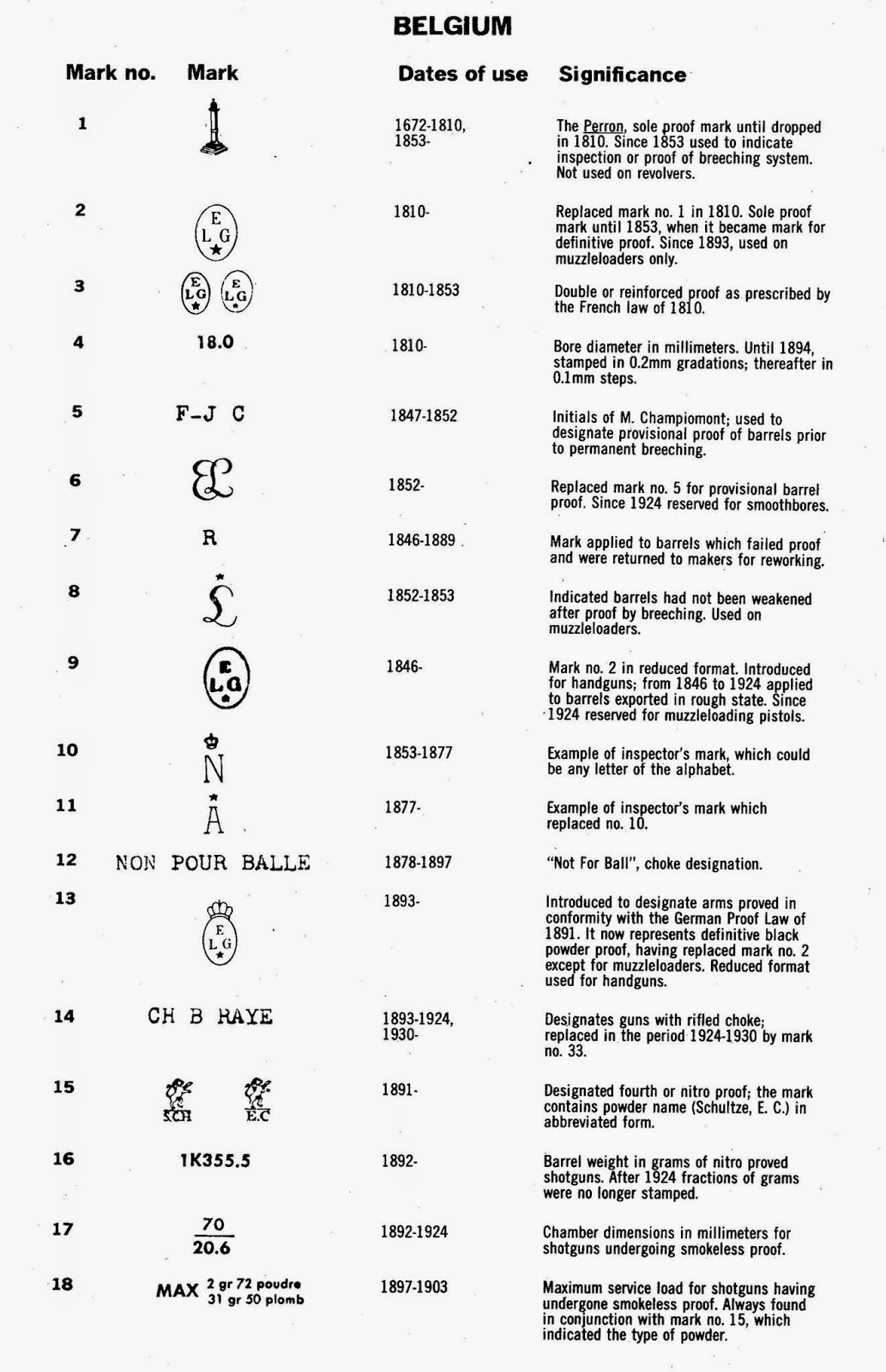 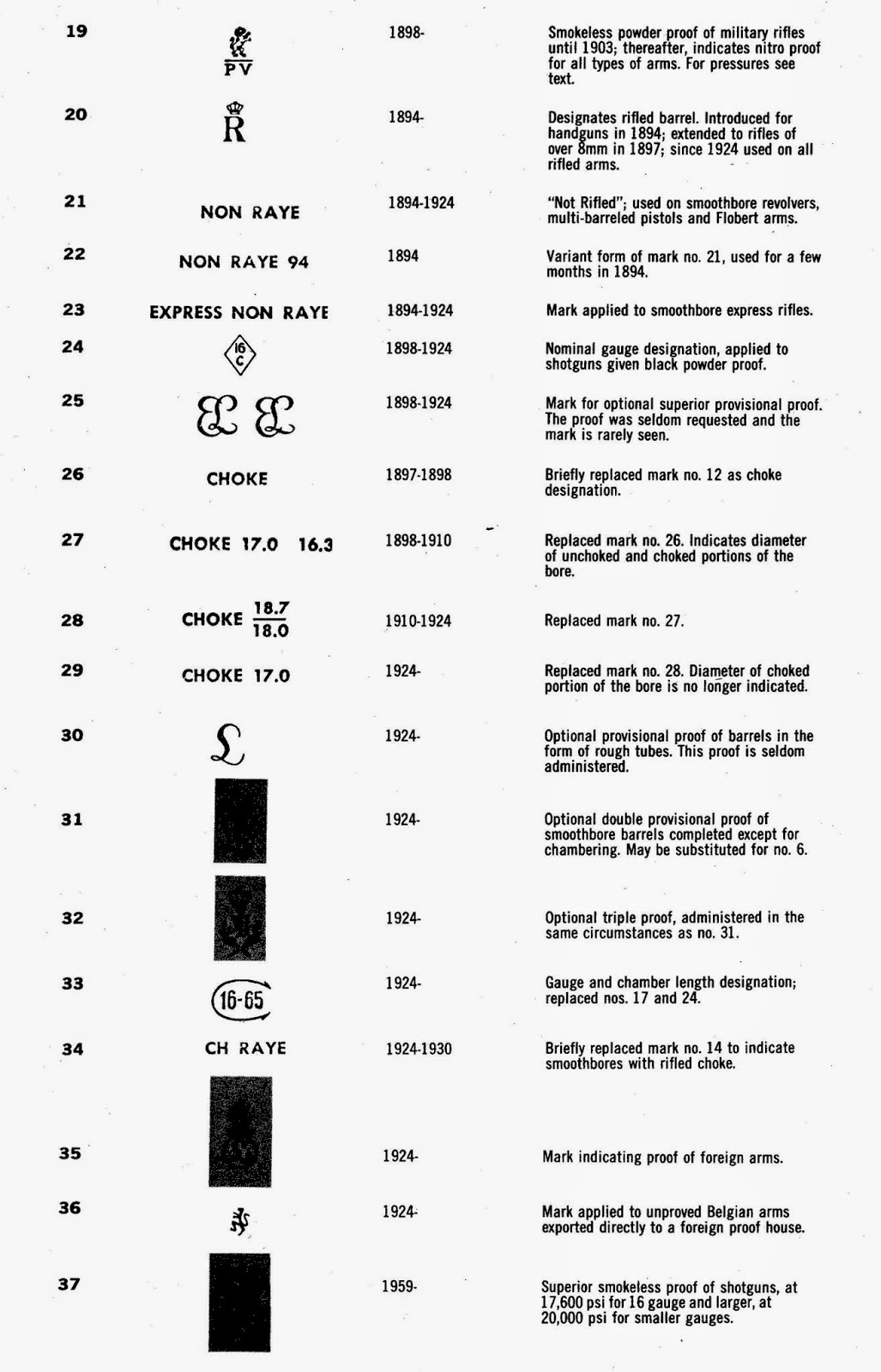 ﻿
No small part of the Belgians' remarkable ability to meet the demands of a wide variety of firms trading all over the world was their willingness to go on producing type of guns that were obsolete.  Flintlock fowling pieces and rifles were made for the Northwest Indian trade until the early twentieth century; so, too, percussion long guns for sale in Africa.  Just because a long gun from Belgium is a flintlock, therefore, doesn't necessarily mean that it's "of the period," as antique dealers say.  It could be of relatively recent manufacture.  Caveat emptor!  Check the proof marks!

If you are considering buying a Belgian gun, look long and hard at its quality.   Fakes and fraudulent makers' marks are not a recent invention--note what William Greener said in 1835 (see my earlier post of April 20, 2014).  If the price seems too good to be true, it probably is.  As the old saying has it, "The buyer needs a thousand eyes; the seller, only one."  The other side of the coin is that quality can indeed be there in Belgian guns:  The Belgian Browning Superposed were all fine guns, while firms like Francotte, Dumoulin, or Lebeau-Courally could make guns of very high quality indeed.