Homemade Bread To Die For, Part 4

Miraculously, your dough has doubled in volume.  This is one reason I enjoy baking bread:  the dough is a living entity; it's alive, and I continue to be amazed by what it does.  The other reason, of course, is that I enjoy eating it!

So, if you have the next two to three hours free in your schedule, you're set to proof the dough and bake it.  Proofing simply means letting it rise a second, and shorter, time.

What you'll need:  a Dutch oven (or something similar with a lid that can withstand 450 degrees--a plastic handle, for example, will melt).  A cutting board or bread board, or a piece of canvas, or a clear, clean counter surface.  A dough scraper or spatula.  Oven mitts or potholders.  A sharp knife or a single-edged razor blade.  A timer.  A bread knife and some butter--but I'm getting ahead of myself.

Sprinkle the work area with flour and then decant the dough from the bowl onto it.  Take a dough scraper or a spatula and turn the edges over onto itself.  Sprinkle more flour on the new top of the dough and on the part where the dough had been.  Now it's time for hands on:  dust your hands with flour and gently mold the dough into the shape of your baking container.  That is, if you're using a round Dutch oven, make the dough round.  Sprinkle any sticky wet spots with flour.

Now put a dishtowel inside a bowl, sprinkle it with flour (wheat flour is good, rice flour is even better), and, turning the dough upside down, put it in the bowl.  Sprinkle some flour on the new top and cover with a towel.  Let it rest in a warm place for an hour to an hour and a half to proof.  If it rises quickly, turn on the oven after an hour; if it rises slowly, turn on the oven after ninety minutes.

Put the Dutch oven in the oven and heat at 450 degrees for thirty minutes.  If you're as forgetful as I am, it helps to set the timer and keep it with you.

Now for the baking.  Using oven mitts, take the Dutch oven out of the oven and remove the lid.  Being careful not to touch the hot pot with your hands, invert the dough so that it falls top down into the Dutch oven.  With a sharp knife, make a cross on the top of the loaf.  Making sure your mitts are on, cover the pot and return it to the oven.

Set your timer for twenty minutes.  After twenty minutes, 1) turn the heat down to 375, and 2) take the lid off the pot.  You will see that your loaf has risen some more in the oven:  this is called oven spring.  3) Set your timer for fifteen minutes if you want a conventional, light brown crust.  If you want a darker crust, check it at fifteen minutes and then at five minute intervals.

Wearing mitts, take the pot out of the oven and the loaf out of the pot.  Put it on a rack, if you have one, or on the burner grid of your range to cool.  If you tap the bottom of the loaf, it will sound hollow.  If you have an instant read thermometer, it should read 200-210 degrees.  If it's below that, cook it a bit longer.

After the bread is done, make sure you turn off the oven.

Your loaf  will continue baking out of the oven for at least half an hour, so try and restrain yourself from eating it immediately.  If you can wait an hour, even better.  But then try a slice all by itself, paying as much attention to it as you would a glass of good wine.  It's really good, isn't it?  And you made it!  Now cut another slice and butter it.  Oh, my!  The only thing better than homemade bread by itself is homemade bread and butter.  Congratulations!  You've made bread to die for! 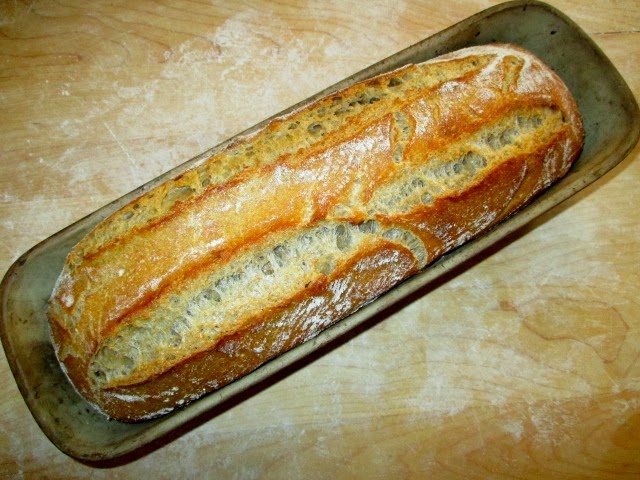 The next post in this series will deal with tools and suppliers.
Posted by Gerard H. Cox at 2:58 PM