Homemade Bread To Die For, Part 2

Good as the bread was that I made by following Jim Lahey's no-knead method, I wanted more complexity of flavor.  Simply put, I wanted to make bread to die for.  I experimented with different brands and types of flour, and I even ground some wheat berries for more flavor.  The results were good but not great.  Cook's Illustrated published an "improved" version of Lahey's recipe that among other ingredients called for half a bottle of beer.  I tried it: it was fussy, and only slightly more flavorful.  Then some favorable reviews appeared of Tartine Bread by Chad Robertson (Chronicle Books, 2010) and I decided to read it.

"Read" perhaps is not the appropriate term, because in addition to Robertson's text Tartine Bread also features hundreds of photographs by Eric Wolfinger, and they are wonderfully instructive.  Wolfinger had had some culinary training but didn't know how to bake bread.  He did know how to surf, however, so he taught Robertson how to surf in exchange for being taught how to bake.  To his already existing passion for photography, Wolfinger quickly added a passion for baking.  When Robertson decided to do a book on baking for the amateur, a book like Jacques Pepin's La Technique and La Methode that would show as well as tell, Wolfinger was the obvious choice for his collaborator.

In  addition to using so many photographs, Robertson adapted the no-knead technique of Jim Lahey to suit a dough that uses what the French call un levain naturel--imagine a sourdough starter that is not old and sour but young and sweet.  Reading Tartine Bread made me realize why my earlier sourdough bread had been so mouth-puckeringly sour:  I didn't realize that the starter had to be refreshed at periodic intervals.  In other words, depending on how often you feed the starter flour and water, you can control the entire range of flavor from sweet to sour.  If I want to bake a loaf of rye, for example, I'll let the starter become a little sour.  For a loaf of white or whole wheat bread, on the other hand, I'll use a young, sweet starter.

What Kipling wrote about composing lays also holds for making a starter or un levain naturel:


"There are nine and sixty ways of constructing tribal lays,
And every single one of them is right!"

Robertson gives one method using five pounds of flour, half white and half whole wheat, and I'm sure it works.  Other methods have you start with organic apples or grapes or malt extract or goat's milk.  I use a modified version of the one Patricia Wells describes in The Food Lover's Guide to Paris (4th ed.; Workman Publishing, 1999) that derives from the near-legendary Parisian baker Paul Poilane.  For reasons I'll make clear in a later post, I have changed the flour to water ratio from 2 : 1 flour to water to 1 : 1 flour to water, so the result is less like a ball of dough than a batter.

If you want to try it, first plan on four days passing before you can mix the bread.  Once you have the starter, however, it will be ready to use or re-use in just a few hours.  The process is simple; it just takes time.

Day 1:  In a small bowl, combine a scant 1/2 cup of filtered or spring water at room temperature with a generous 1/2 cup of bread or whole wheat flour, preferably organic and unbleached.  The consistency will be similar to pancake batter.  Cover it with plastic wrap, and let it sit at room temperature for 24 hours, more or less.  (If your kitchen is cold, put it in the oven with the oven light on.)

Day 2:  The starter may have risen slightly, have a few bubbles, and perhaps a slightly acidic smell, or it may just seem inert.  In any case, add another scant 1/2 cup of water at room temperature  and a generous 1/2 cup of flour and mix well.  Re-cover and keep warm.

Day 3: By now, the starter should be showing signs of life.  If it hasn't, throw it out and start over.  If a few bubbles are there and the starter smells a little bit like a ripe cheese, add the same quantities of water and flour, re-cover and keep warm.

Day 4:  Almost there.  Here's a picture on the fourth day of a starter based on whole wheat flour-- Creation of the World in a Pyrex bowl!  Taste it:  it should be tangy but not sour (if it is sour, shorten the intervals of feeding). 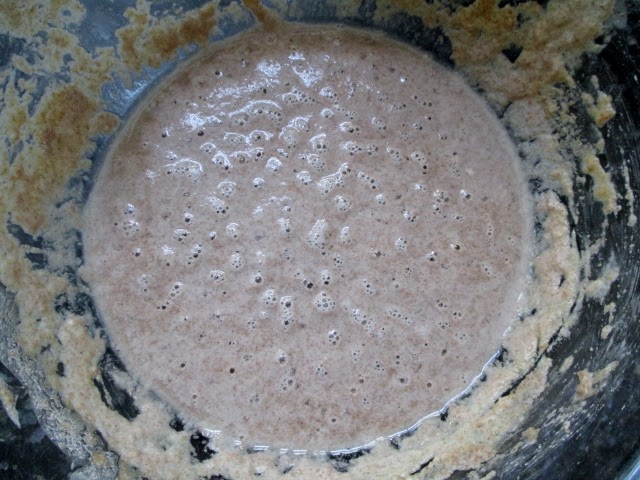 Day 5:  Congratulations!  You have successfully trapped wild yeast and cultivated it into a starter.  The wild yeast, together with lactic acid bacteria, have been consuming the flour and creating an alcoholic fermentation.  A by-product of that fermentation is carbon dioxide, and that, in turn, will cause your bread dough to rise.

You are now ready to bake.  If, however, your schedule doesn't allow this, just put the starter in the fridge.  If you still can't  free up the time to bake in the next day or so, toss out 1/2 of the starter and add the same amount of water and flour.  Mix it, and return it to the fridge.  Do this every five days or so, and the starter will happily survive.

In the next post, I'll tell you how to use your starter to bake a loaf of bread so good that your friends (should you decide you really ought to share) will exclaim, "You baked this bread?  I can't believe it!"