In one of my all too infrequent attempts to get organized, I recently went through my father's fly tying box, something he probably last used in the 70's.  In it were some odd bits of fur I didn't recognize together with little cardboard boxes of hooks, one of which was from Herter's.  And then I suddenly recalled why those bits of fur were there:  we'd ordered them from Herter's one time when I was in college, back in the late 50's.  I could remember sitting with him, laughing about whether colobus monkey fur might tempt those selective trout on the Firehole.  Herter's prices were so low, however, that we ordered a variety of stuff, and some of it still survived in that box.  Herter's had long since gone out of business, but seeing the hooks and fur made me wish I had kept a copy of one of their annual catalogs, a treasure trove of outdoor gear.

Not long after, I came across a 1968 catalog from Herter's in a used book store and promptly bought it.  This one is Catalog No. 78, suggesting that Herter's began issuing catalogs only a few years after its founding in 1893 (the company may have been founded then, but several sources on the web state that the company only began to offer sporting goods after WW II).  Its cover was just like all the ones I remembered.  It always featured a coat of arms:  in the center was a shield of crossed flintlock rifles with a superposed dagger as well as a duck below plus two wildly out of scale fishhooks.  A white tailed deer on its hind legs supports one side of the shield; a seahorse supports the other.  Adding to this trademark's bizarre quality are a length of red and black rope surmounting the shield, a leaping trout or salmon touching the rope, and a three-masted ship resting on the fish's back. 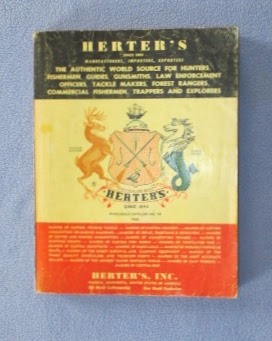 These catalogs were good sized, 8.5" by ll", and this 1968 one runs to 597 pages plus index.  What stands out, however, is less its bulk than its hyperbole. Everything listed is the best available, regardless of price, and produced to the highest possible standards.  The copy is anything but routine:  absurdities are everywhere.  Herter's stainless steel set of garden tools will not only stay mirror bright but "they do not destroy the vitamin or mineral content of soils as with ordinary steel tools."  Say what?  Herter's "Genuine Hudson Bay Wilderness Ice Chest" is the only ice chest endorsed by the International Guide Association" (which as far as I know was a figment of George Herter's imagination).  George L. Herter designed the sheath knife carrying his name after "generations of testing and opinions from some of the best known guides in North America, Europe, Africa, and Asia."  In fact, it is a blatant rip-off of the knife and sheath designed and sold by D. H. Russell in Nova Scotia.

And then there are the books.  Herter wrote the "World's Greatest Book on Fly Tying," books on reloading ammunition, a professional guide's manual (my copy has disappeared, but I still recall the entry, "How to Make Pond Scum Soup"), and several volumes of cookbooks advertised to contain "the secret recipes of the most world famous cooks from before the time of Christ up to the present time."  It will teach you not only how to make "the finest Canadian type whiskey from the cheapest American whiskey for 10 cents a fifth," but  how to make the "secret hors d'oeuvre from the Monk Perngon (sic) who invented champagne.  After you eat one of these small sandwiches, any liquor that you taste, no matter how poor in quality, will taste like the very best."

Herter's only lasted another ten years or so after this catalog came out in 1968.  Accounts of the company's demise vary, some stating that the company filed for bankruptcy in 1977, others in 1981.  I recall hearing at the time that Herter's had run afoul of the laws regulating importation of fur and feathers into the US.  The few bits and pieces left in my father's fly tying box, like the catalog, serve as a reminder of a vanished era of merchandising, a time when hyperbole was not the exception but the rule.  It's a hoot to read this catalog.  And I'm going to keep my eyes open for an inexpensive copy of Herter's Bull Cook and Authentic Historical Recipes and Practices.
Posted by Gerard H. Cox at 9:12 AM