This post has been longer in getting up than I anticipated.  Put the delay down to the holidays and a tough winter combined with taking on a new Lab puppy.  But now I can return to the BRNO 7x57 sporter and  suggest some ways to make checkering its stock easier and less error-prone.  This post could be entitled "An Ode to Blue Tape," using the BRNO as an example.

Remember the old quip:  "How do you get to Carnegie Hall?"  The answer of course is, "Practice, practice, practice!"  How do you avoid the most common error in checkering: over-runs, those pesky little cuts that extend just beyond the border that's supposed to contain them?  Practice checkering!  After you've checkered a dozen or so stocks, you almost certainly will have gained much more control of the checkering tool.  While you're gaining control in the interim, however, and perhaps even afterwards, the solution to avoiding over-runs is Scotch Blue Painter's Tape.  I use the 0.94 inch x 60 yard size.

Available at any hardware store, this painter's tape has many uses for checkering.  I use a template cut out of aluminum foil to scribe in the borders on the pistol grip for a checkering panel. How do I hold down the template as I scribe?  Scotch blue painter's tape.

A strip of Scotch blue painter's tape laid carefully along the stock will give you a straight line to follow with a scribe or cutter (if you have difficulty following its thin edge, add another strip on top of it).  A strip can extend a line along a compound curve like a pistol grip.  By tearing off small sections and layering them tangent to a line, you can even tape a compound curve, as on this pistol grip. 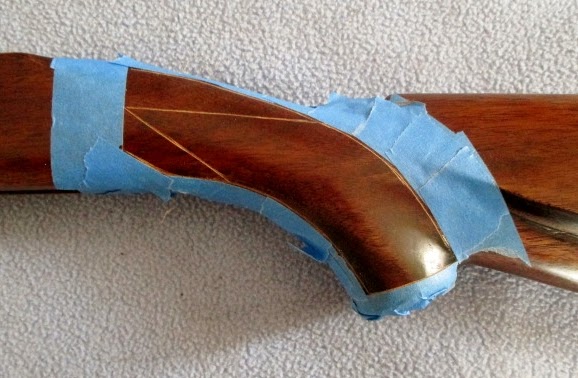 ﻿
So, when checkering, how do we avoid over-running a border?  All together, now:  Scotch blue painter's tape.

How do I make one side of checkering begin and end at the same point of the stock as the other side?  Run a piece of tape from one side to the other, checking it to make sure the curvature of, say, the grip doesn't throw it off.

How do I know my points will end up aligned?  I simply put a strip of tape where I want the points to go:  I checker to the edge of the tape, and no farther.  This photo shows the grip after I've completed the first set of cuts.  The curled piece of tape visible on the right is from lining up the points on the other side: 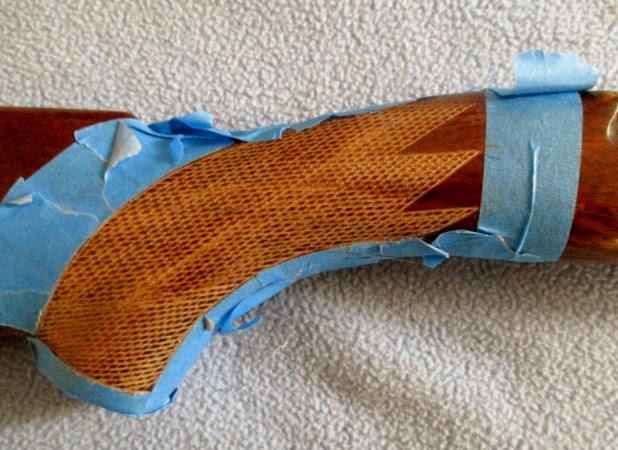 As some of us have learned the hard way, tape on a gunstock can lift the finish off when it is removed.  3M says this tape is safe for finishes "up to" fourteen days, but I don't like pushing my luck.  I've kept it in place for a week, with no problems on removal.  If I haven't finished checkering the stock in a week, I re-tape.

As the proverb has it, an ounce of prevention is worth a pound of cure.  If you resent the time taken to tape a curved panel (or re-tape it after a week), take a  moment to consider how much time it takes to fix a mistake:  scraping out the cut, sanding it with several grades of sandpaper, re-staining, refinishing--a number of days, in short, by the time it can pass inspection.  Wouldn't taping the panel in the first place have been preferable to spending all this time and effort?

Here's a shot of the checkered grip "in the white": 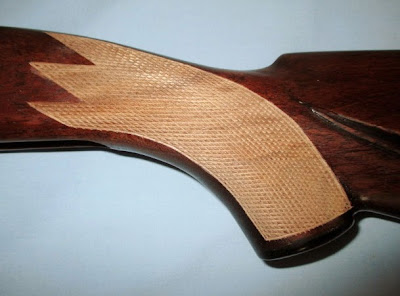 If you look closely at the middle point, you can see where I overran the border and had to scrape out and sand the cut.  This will disappear after dyeing when I apply a coat of TruOil thinned by 50% with mineral spirits.

The checkering on the fore end wraps around.  Given the relatively short fore end (14 1/4" from the trigger to the tip) to have the 21 1/2" barrel look in proportion, I decided to terminate the front end not with points but with an English-styled square border that affords more checkering for my forward hand's fingers.

I then dyed the checkering with the dye mix I'd saved for this purpose (see Part 6), applied a coat of alkanet oil to the checkering and then a thinned coat of TruOil, brushing it in with a toothbrush, and carefully wiped up any overflow.  The stock is now finished, literally speaking.  The remodeled stock without pad weighs 25 ounces, or one pound nine ounces.  Even with its minimal length of fore end and no fore end tip, this is unusually light for walnut.

After letting the TruOil dry overnight, I screwed on the sling stud and recoil pad, which brings its weight to just under two pounds.

As a parting note, I've checkered something on the order of two dozen stocks.  As I admitted above, I still make mistakes.  To checker, you need to exercise patience.  You need to take your time.  And the way to minimize mistakes is straightforward:  Use 3M's Scotch blue painter's tape!