Faithful readers of "Hits and Misses" will doubtless recall my earlier post, "Dating a Double-Barreled Hammer Gun" (http://gerardcox.blogspot.com/2013/07/dating-double-barreled-hammer-gun_29.html).  That post concerned a 10 gauge double with the virtually unknown name of C. K. Weston on its bar action locks.  This post is about dating a 12 gauge hammer gun by the well-known and prolific maker W. & C. Scott & Son.  This firm not only sold guns world-wide under its own name but furnished barreled actions and guns in varying degrees of completion to other firms.  To adapt John Campbell's phrase in The Double Gun Journal (Spring 2011), W. & C. Scott & Son was gunmaker to the gunmakers.


Here is the 12 gauge in question.  This gun has 30" Damascus barrels and weighs a tad under 6 3/4 pounds.  A Jones underlever locks the barrels to the action.

On the rib is "W. & C. Scott & Son London."  In 1862, William Middleditch Scott took over the Birmingham firm established in the 1840's by his father William Scott and his uncle Charles Scott.

Here, courtesy of that wonderful resource, Cornell Publications, is the cover of Scott's 1872 catalog, and, except for fastening the fore end with a wedge, the upper gun on the right (front ) cover is very close to mine:


﻿
Although my Scott has a moderate degree of engraving, it has no street address preceding the "London" on the rib, an indication that it is what the 1872 catalog terms a "plain gun."

It's easy to identify a Scott gun when the firm's name is on the locks and on the barrel rib.  It's more difficult, however, to come close to when a given gun was manufactured by this firm.  For one reason, the second half of the nineteenth century was a time when one innovation in gun making rapidly succeeded another.  For another, sportsmen-and-women tended to be conservative, then as now, except, of course, when they weren't.  And third, what we might take to be old-fashioned or outmoded features were often retained in the less expensive but sturdy guns offered by a firm to gamekeepers, or to those in the service, civil or military, or to explorers and travelers planning to be far from civilization and its attendant gunsmiths.  It's difficult to distinguish who bought what, in other words, although David J. Baker suggests in Heyday of the Shotgun (Safari Press, 2000) that a strong clue to a gamekeeper's gun  is a stock so worn that the checkering is nearly gone--and that is true of my gun:  only the border lines remain of the checkering.

So how should we proceed to date this Scott?  By following the same procedure I described in my earlier post: first, by looking at the proof marks (assuming there are some, that is: there won't be on guns made in America); and second, by trying to date the gun's salient features.  Obviously, a gun can't be earlier than its latest feature.

As the next picture illustrates, it has back action (the main spring is behind the hammer) rebounding locks (which means that as soon as the hammer hits the firing pin, it springs automatically back into a half-cocked position, so you don't have to lift the hammer off the striker to open the barrels). 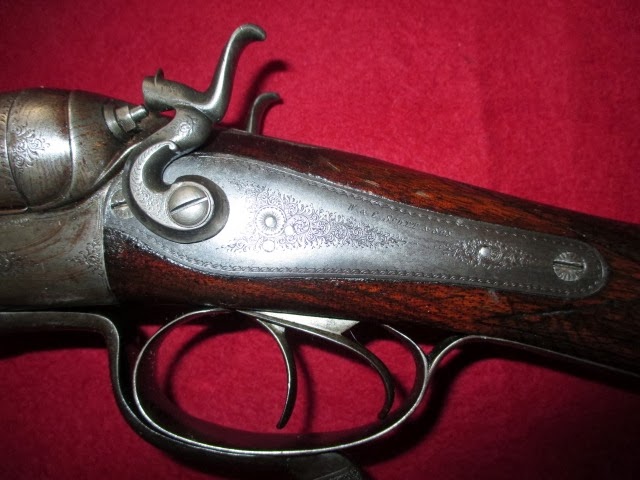 Scott's 1872 catalog shows this model as "The Double Grip Breech Loader Back Action Locks," noting that it is known as "The Trade action," and describing it as "a sound and firm gun, and one much used in this country."  The catalog also notes that it can be ordered with rebounding locks like this gun.

The proof marks of this Scott are straightforward: 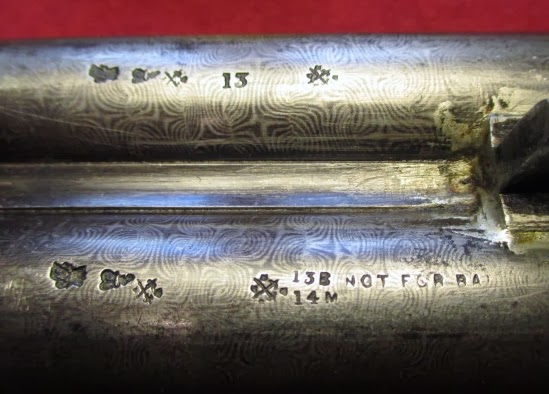 
Looking at Diggory Hadoke's useful chart from his Vintage Guns, we can see that despite the "London" on the rib the barrels were proofed in Birmingham.  The "13B" and "14M" plus the "NOT FOR BALL" correspond to the 1875-1887 period.  The "13" and "13B"means that the nine inches from the breech the diameter of the bore is that of a 13 gauge, or .710".  (A 12 would be .729".)  The "14M" means that the muzzle diameter is .693".  The proof marks thus reveal that the bore is choked slightly.
Why, then, were the barrels not marked "Choke"?  Because the proof marks tell us that this gun was made in the interval before choke became widely accepted.  Although Greener did not discover the benefits of choke, he was the first gunmaker to perfect and publicize it, and he himself states that he only began to experiment with choke in the spring of 1874.  The chart below indicates that "CHOKE" did not  appear as a proof mark until 1887. 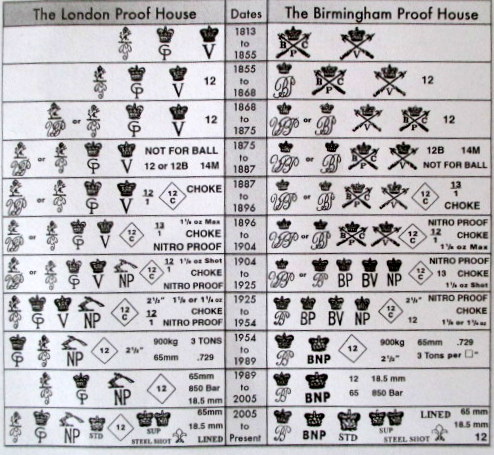 And, from 1887 on, NOT FOR BALL was no longer used as a proof mark.
So much for the proof marks.  They establish that Scott made this gun sometime between 1875 and 1887.  [Afterword, 5/31/2015:  Or so I thought.  My reasoning was right, but polishing the barrels for re-browning revealed that "CHOKE" was stamped on the left barrel.  It had been invisible before.  The chart above gives 1887 as the earliest date for this mark, and it continued in use until the early 1900's.  Adhering to the rule that a gun can be no earlier than its latest feature, this Scott hammer gun can't have been proofed before 1887.  Yet its barrels also are marked "NOT FOR BALL," and that mark was not used after 1887.  So what date is indicated by these proof marks?  1887, or perhaps just a wee bit later if an inspector stamped "NOT FOR BALL" out of habit.]

Given that this gun was proved in Birmingham and that the Scott factory was in Birmingham, the "London" on the rib might have been a sales inducement, but not its place of manufacture.  Scott did have a salesroom in London, however, at 10 Great Castle Street in Regent Circus.
What are the other characteristics that would help date this gun?  To start early and progress chronologically, the underlever was patented by Henry Jones in 1859.  It remained in use despite its slowness relative to a snap action closure because it was both silent in operation and strong.  This gun, for example, used hard, still locks up tight. The strength of the Jones underlever made it especially popular on guns for waterfowl and big bore game rifles.
The butt does not have the iron plate characteristic of muzzleloading guns and relatively early breechloaders like the C. K. Weston.  Instead, it has heel and toe plates with, originally, checkering in between.  Heel and toe plates were popular in the late 1860's, largely giving way in the 1870's to checkered butt pates made out of horn or ebonite.
The fore end is held to the barrel by a simple catch, one step forward from a wedge through a barrel loop (as on the catalog cover) but not as refined as one of the mechanisms like the Deeley/Edge lever in the fore end or the Anson push rod at the fore end's tip.  Those catches date from the early 1870's.
All the features so far are rather behind the times for a gun that, as the proof marks demonstrate, can't be earlier than 1875.
What features suggest a date more in keeping with the 1875-1887 period?  I see two such features, the engraving and the low hammers.
The engraving is not large or florid, as on earlier guns, but small and controlled. 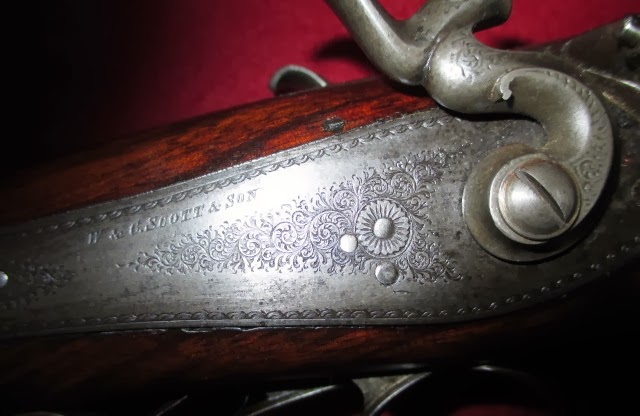 ﻿
﻿
The hammers' position is low enough when they are cocked that they aren't even visible in the line of sight.  Hammers began high and became progressively lower (and then, of course, gave way to hammerless actions), so these low hammers would suggest a date in the 1880's. 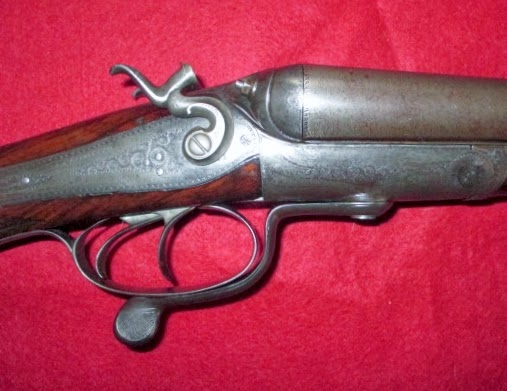 ﻿
But that date in the 1880's can't be after 1887 at the latest, or the proof marks would be different.  Taken all in all, therefore, despite its conservative use of Jones underlever and heel and toe plates, the later features of the small-scaled engraving and, especially, the low hammers suggest a date sometime in the 1880's but no later than 1887, when the proof marks no longer indicated "NOT FOR BALL" but did include "CHOKE."  [As noted above, the combination of "NOT FOR BALL" and "CHOKE" dates this gun to 1887.]
This may be the place to note that this style of gun could well have had even later proof marks.  This conformation remained popular not only for gamekeepers but anyone else who placed a premium on good value.  Baker's Heyday of the Shotgun has a catalog illustration from Pape of Newcastle showing "The Keeper's Gun" for six pounds, ten shillings--in the mid-1890's!  That illustration noted as an improvement the gun's low hammers below the range of sight.  And given that Scott sold guns in the white to the trade, it's quite possible that this Pape had begun as an even later W. & C. Scott & Son gun in the white.
--------------------------------------------
﻿
Subsequent posts will deal with the gentle restoration of this shotgun.  I need to recut the checkering and to brown the Damascus barrels, but the last thing I want to do is make it look new.  Right now, as Shakespeare's Lord Chief Justice tells Falstaff, "every part about [it is] blasted with antiquity."  I want to find a happy medium between "blasted with antiquity" and "like new," so it still looks well-used but also well-loved.  Its lines are long and lean, and I hope once more it can be lovely.

Any and all suggestions about a gentle restoration are most welcome.
Posted by Gerard H. Cox at 8:15 AM