As the late Charles Stratton observed, the owner of an SMLE is "confronted with a seemingly hopeless array of marks and models and markings and apparently endless varieties of configurations and conversions."  Trying to figure out what these marks meant on my Mark III*, I began to wish for a Secret Decoder Ring.  In this post, I shall try to illustrate the key markings on my SMLE that was made by Birmingham Small Arms (BSA) in 1916, comment on their implications, and list some reference works if you want to pursue this topic with an SMLE of your own.  I hasten to add that I am not remotely an expert, only someone who has tried to figure out the history of this one rifle.  If you know better, please don't hesitate to comment.

The place to start is the collar or socket joining the butt stock to the receiver.  The collar tells you where and when the rifle was manufactured. 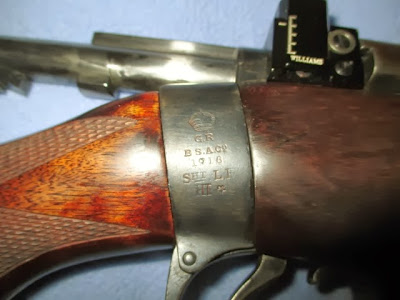 Here you see the King's or Tudor Crown, the GR initials of the monarch, Georgius Rex, or King George V (1911-35), the manufacturer followed by the date, and the model or Mark.

Next might come the serial number (or, in the case of my rifle), the numbers (plural) of the rifle stamped on the right side of the receiver ring.  Ideally, the same serial number will be duplicated on the barrel and on the side of the bolt handle.  Matching numbers suggest--but do not prove--that headspace is correct.  If you plan to shoot the rifle, check out the headspace first. 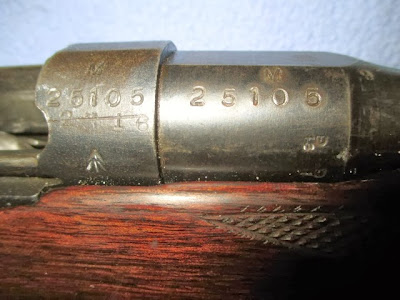 The serial number on this rifle is M / 25105 (by convention, the slash is used to indicate a different line).  Stratton (see list of references at the end of this post) stated that everywhere but at Enfield a given range of numbers was limited to five digits (Enfield limited its range to only four digits), so that when 99,999 was reached, the next series would begin with the letter "A" through A 99,999, then "B" through B 99,999, and so on.  M and 25105 are repeated on the barrel and on the rear side of the bolt handle.

If you look closely, you can just make out another number--2316--stamped on the receiver ring but with a line through it, canceling it.  The number appears nowhere else on the rifle, evidence perhaps that an older receiver and perhaps its barrel may have been converted or reconditioned as part of a new weapon in time of war.  One question is, Which war?  Is this a 1916 BSA Mark III* receiver originally numbered 2316?  The Mark III* was adopted on January 2, 1916.  This rifle's lack of a letter prefix would make it the 2,316th Mark III* made by BSA in 1916, preceding all the serially numbered ones with letter prefixes.  During WW I, E.G.B. Reynolds has pointed out, BSA was manufacturing about 10,000 rifles a week.  This low a serial number without a letter prefix would place its manufacture in the very first week after the Mark III* was adopted.

But what about the "M" letter and matching serial numbers?  The rifle's collar tell us that BSA made the rifle in 1916.  During WW I, however, BSA apparently did not use an "M" at all, so that rules out the "M / 25105" as BSA's original 1916 serial number.  No other arsenal's use of "M" corresponds to post WW I dates, according to Stratton's listing of prefixes used by the various small arms factories.  "M" was used by BSA as a serial number prefix in 1941 and 1942, so it seems likely BSA reconditioned this rifle for service in 1941 or 1942 and at that time gave it the new serial number M / 2515.

Just behind the back sight (or here, where it was), the barrel is stamped H.V. / S.C. 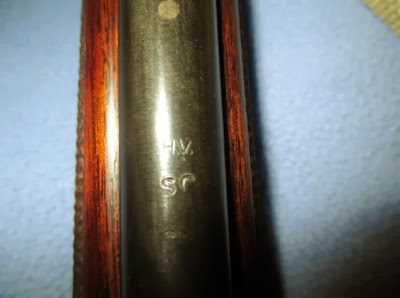 According to Stratton, "H.V." stands for high velocity, a mark stamped on rifles that had had the rear sight altered for the Mark VII bullet with its faster 174 grain bullet.  The "S.C." stands for small cone:  the forcing cone was lengthened 0.02 inches at the same time to improve accuracy.  Stratton terms these stampings the second variation, found on later Mark III and Mark III* rifles.  This marking is therefore consistent with the 1916 date of manufacture.

As the hucksters used to say on early TV commercials, "But wait, there's more!"  Another mark is relevant here.  On top of the Knox-form (the flat on the barrel immediately ahead of the receiver) is a circle enclosing two overlapping "F's": 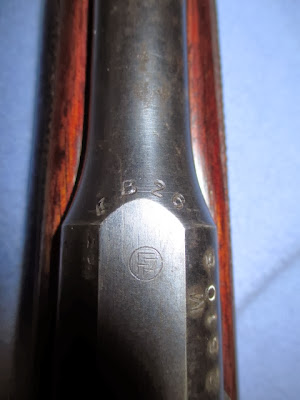 This mark indicates a part of this rifle's history between the two world wars.  When the Irish Free State was formed in 1922, most of its military equipment came from Great Britain, including Lee-Enfield rifles.  The National Army marked these rifles with an FF enclosed by a circle, signifying "Fianna Fail."  (Exactly when this practice began is less clear.)  "Fianna" alludes to an ancient and rather informal military organization that with a slight stretch of the imagination could be taken to correspond to the standing army of a modern country.  "Fail" means "destiny," as in one of the ancient names of Ireland, "Innisfail," the Isles of Destiny.  "Fianna Fail" thus signifies something on the order of the Fianna or National Army of Ireland.  (Post script 1/07/2015:  Thanks to Fritz's sticky on the Lee Enfield page at Gunboards, I now know FB 26 marks on the underside of the barrel and visible here just in front of the Knox-form denote the Firth Brown steel batch.)

So far, therefore, we have a Mark III* made by BSA in 1916 that became the property of the National Army of Ireland in or shortly after 1922.  But why then would BSA in 1941 or 1942 be reconditioning a rifle that had belonged to the Irish Free State?  My first thought was that this rifle had been reacquired by the Brits following the Battle of Dunkirk in WW II.  In May, 1940, the British Army had to abandon a great deal of equipment in what Churchill called "the miracle of Dunkirk," the evacuation of 338,226 British and French soldiers off the beaches by over 900 ships and boats.  The British army then had to obtain rifles wherever they could be found, including Ireland.

I felt rather pleased with this line of reasoning, but my pleasure was short-lived. The very next day, I noticed yet another set of markings on the left side of the Knox-form: 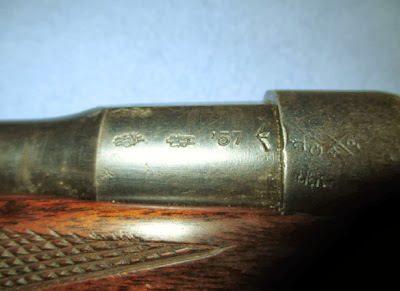 Reynolds identifies the number, '37, as the Date Stamp, indicating the year of government acceptance.  The Broad Arrow to its right indicates British government property.  It could have been applied in 1916, but what I take to be its original serial number (the canceled 2316) also has a Broad Arrow below it.  Here, the Broad Arrow's placement next to the number '37 suggests that this rifle came back into British service in 1937, three years before the Battle of Dunkirk.  It may or may not be coincidental that the Irish Free State had become Ireland in that same year.  In any case, the "M" series number on the bolt, barrel, and receiver suggests that BSA probably reconditioned this well-used rifle a few years later, in 1941 or 1942, stamping it with its final serial number, "M / 25105."

Skennerton, Ian. The Lee-Enfield:  A Century of Lee-Metford and Lee-Enfield Rifles &
Carbines.  2007.